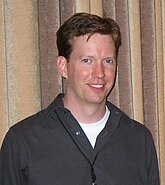 Sean Michael Carroll (1966–) is an American theoretical physicist, specializing in gravitation, cosmology, and field theory. His recent research concerns quantum mechanics and cosmology on one and entropy and complexity on the other.[1] He is currently a research professor at the California Institute of Technology.[2] Carroll is an outspoken atheist and science popularizer. He is the author of a student-friendly textbook titled Spacetime and Geometry: An Introduction to General Relativity aimed at beginning graduate students (and advanced undergraduates).[3] He is also known for his blog, Cosmic Variance, though other people also blog there.

He should not be confused with Sean B. Carroll, a biologist who also does excellent skeptical work.