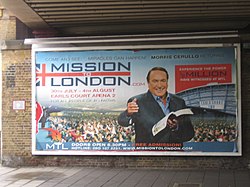 Cerullo vs. London, 2007
This article is about the Christian woo-peddler. For other pages named Morris, see Morris.

Morris Cerullo is a Pentecostal Christian evangelist who is prominent in the faith healing movement. He holds crusades in a revival type atmosphere, encouraging people with serious illnesses and disabilities to attend so that Jesus can (allegedly) "heal" them. He has used posters of people abandoning wheelchairs and crutches to promote his crusades.

Cerullo claims that he received a mission from God in 1982 in Porto Alegre, Brazil: "Son, build Me an army." Why an omnipotent being would need an army is unclear, but not unprecedented for this particular deity.

Cerullo was an early and prominent promoter of the scare over Satanism which later became known by critics as Satanic Panic. Cerullo championed the testimonies of two fraudulent "ex-Satanist" fakes, John Todd and Mike Warnke, in the early 1970s, and set up a traveling mobile exhibit dubbed the "Witchmobile" where he displayed such things as occult artifacts, astrology items, Ouija boards, and Tarot cards in an attempt to warn young people to stay away from those things and to accept Jesus. Cerullo cut off his association and promotion of John Todd early on but remained closely associated with Mike Warnke until Warnke left to start his own ministry at the time of the publication of his phony memoirs, The Satan Seller.

After Jim Bakker's much publicized adultery scandal, the PTL Club and Heritage USA amusement park fell into the hands of first Jerry Falwell, then Morris Cerullo. He lost the park to a Malaysian investment group in a lawsuit but retained control of the PTL television network, which he renamed the Inspirational Network (now simply known as Inspiration and run by his son, David Cerullo).

More recently, Morris Cerullo ran an ad in the U.K. in 1999 for his crusades, in which he claimed "Satanic hordes… occupied the principal palaces of power in Europe" and proclaimed homosexuality an "abomination". The channel that ran his ads was fined £20,000 over this ad.

His ministry runs a website under the name "Morris Cerullo World Evangelism", and offers a number of services, including the "Morris Cerullo Online Institute of Ministerial Studies" offering teaching and ordination for an "annual giving requirement of $240" and a "non-refundable application fee of $125.00" (Hint: The Universal Life Church can ordain you on-line for free!), as well as a bookstore offering assorted DVDs, CDs, and books on Bible prophecy.