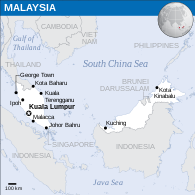 Malaysia (also known as Bolehland,[1] meaning roughly 'can-do land', also Malaysia boleh!), sometimes officially known as the Federation of Malaysia,[2][3] is the name of that country that makes up the lands between Thailand and Singapore, with a chunk of Borneo

thrown in too. Malaysia has a peculiar political atmosphere that is perplexing even to locals. There are many ethnic groups, both indigenous and immigrant (or descended from immigrants).

Generally overshadowed by its neighbors, it is best known internationally for its flag carrier Malaysia Airlines 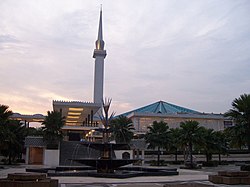 The National Mosque of Malaysia, in Kuala Lumpur.

Muslims make up about 60% of the population, including — by constitutional definition — the entire Malay ethnic group (about 50%). The next largest ethnic group is the Chinese (about 25%), who, like Chinese people elsewhere, observe a combination of Buddhism, Taoism, Confucianism, Christianity, and other traditions. The Indian minority (about 7% of the population) includes Hindus and Muslims. Some 9% of the population is Christian. Malaysia is also the only country where candidates must state their ethnicity and religious views before sitting for a public examination.[citation needed]

Malaysia's laws are a strange mixture of secular and religious, with different standards applied to various groups. The constitution requires that every ethnic Malay be a Muslim — but the other groups can believe what they like. Muslims are legally subject to Sharia law, meaning that activities such as premarital sex[notes 1] and imbibing alcohol — which are perfectly normal among the Chinese community, some of the Indian community, and tourists — are legally punishable for ethnic Malays and other Muslims. Those wishing to abandon Islam or convert to another faith may still be referred to a Sharia court for punishment since the secular and Sharia court might not recognize the conversion. They could be held liable for the crime of apostasy. Insulting Islam can lead to a prison sentence.[4]

The secular and Sharia courts practice corporal punishment (by caning) for some offenses. Capital punishment (by hanging) is the usual sentence for serious crimes and is mandatory for convicted murderers.

Though the word Bumiputra (or Bumiputera, literally "son of the land") does not appear in the constitution, the word in Malaysian politics refers specifically to Article 153 of the Federal Constitution.[6] It effectively refers to ethnic Malays and indigenous people of Sarawak and Sabah — in contrast to ethnic Chinese, ethnic Indians, and Orang Asli. The Orang Asli are the indigenous people of the Malay Peninsula and are among the poorest and most vulnerable people in Malaysia.[7]

In contrast, ethnic Malays, who represent half the population, and most of the political power, have a constitutionally-defined program working in their favor. Some government departments have included Orang Asli as a protected class,[8][9] but this is not constitutionally enshrined. Privileges for the Bumiputra include a minimum of 30% Bumiputra ownership of stocks listed on the stock exchange, housing preferences, government contract preferences, education preferences, and automobile import preferences; in effect, institutionalized racism. Some, if not all, of these preferences have led to corruption.[10]

LGBT rights are unrecognized in Malaysia. The government retains the colonial era penal code criminalizing sodomy, and attitudes towards the LGBT community are shaped by Islamic mores.

In 1994, the government banned anyone homosexual, bisexual, or transsexual from appearing in the state-controlled media. In 2001, the former Prime Minister stated that the country would deport any visiting foreign cabinet ministers or diplomats who are gay. Many similar examples could be cited, but you get the picture.[11]

Former Prime Minister Najib Razak made clear in August 2015 that he believed Malaysia should not support LGBT rights. Razak stated that his administration would do its best to uphold human rights but only within the confines of Islam and that Malaysia could not defend the more "extreme aspect of human rights", such as gay, bisexual and transexual rights. This prompted Human Rights Watch

to suggest that Malaysia fuck off withdraw from the United Nations if the government was not serious about upholding human rights for all.[12]

Malaysia is, on paper, a democracy — even the king (Yang di-Pertuan Agong) is elected (not by popular vote, but on a rotating basis determined by his fellow sultans and rajas).[notes 2]

The prime minister has always been a member of the United Malays National Organisation,

the party in power from independence in 1957 until 2018. Members of the opposition, including one who has held office as lofty as Deputy Prime Minister, can expect imprisonment and beatings by the police as a reward for their efforts.[notes 3]

Due to the sparse population of atheists and agnostics in Malaysia, there is currently no official secular organization in Malaysia. There was a Facebook group known as MAFA (Malaysian Atheist Freethinkers and Agnostics), but it is now defunct.

On 13 May 1969, an opposition party won the election for the control of the state of Selangor. During the party's victory celebration, their supporters clashed with the ruling party's supporters, who also insisted on doing their own celebration. Many Malaysians (mostly Chinese) died during the incident.[13]

rally was held in Kuala Lumpur, with 30,000 attendees marching for free and fair elections. The event was broken up violently by the police.[14] Subsequent Bersih rallies were organized in 2011, 2012, and 2015. The latter passed off peaceably and drew a crowd estimated as high as 250,000, focusing on calling for Prime Minister Najib Razak's resignation in light of recent corruption scandals.[15]

In 2014, after Germany defeated hosts Brazil 7-1 in the men's soccer World Cup, a Malaysian Member of Parliament, Bung Mokhtar Radin, tweeted, "WELL DONE..BRAVO...LONG LIVE HITLER."[16] He then doubled down by refusing to apologize for what might have been the oddest application yet of Godwin's Law.[17]

A bomoh is a Malay terminology for a shaman, and initially, they mainly were traditional herbalists/healers with a bit of astrology and geomancy thrown into the mix. Until the Islamic revival started in the 1970s, bomohs went quietly about their woo-tastic business, pretty much as they had done for centuries. The serious young Islamic Malay men then began to view bomohs as deviant from the Muslim faith, and today many are viewed with suspicion (a classic case of being right for all the wrong reasons).

A notable charlatan is Raja Bomoh (king of the bomohs), who shot to worldwide attention in the aftermath of the Malaysia Airlines Flight 370 disaster. He attempted to locate the missing plane with bamboo binoculars looking inside a traditional fish trap, to great media fanfare. Days later, this was followed by the televisual ritual of banging two coconuts together. The result? (Aside from Da Fuck?) He proclaimed that the plane was suspended in the air somewhere between three "locations" - the Philippines, the South China Sea, and somewhere else. And we can't find it because it was hidden by the Bunian people

Food is diverse in Malaysia. Local Favourites include Assam Laksa, Nasi Goreng, Sambal Ikan, Roti Canai, and Bak Kut Teh. Seafood cuisine is popular in Malaysia as well. Food hygiene is a major concern in Malaysia as many local food operators are not subject to as much scrutiny as their counterparts in Singapore. Kang kongs are cheap in Malaysia, according to their prime minister Najib.[citation needed]

Malaysia has a diverse culture of Chinese, Indians, and Malays. Chinese celebrates their holidays together with Indians and Malays, and most of the populace a cohesive and united. Certain factions of ultranationalist Malay groups believe that Malaysia should only have Malays, but they are generally concentrated in suburbs rather than cities.

Prostitution is considered Haram (forbidden) and therefore illegal in Malaysia. However, Malaysia's Chinese and Indian communities are exempted from such rules so long they do not provide their services to the Muslim communities or dress provocatively in public. Many spas located in hotels provide package services at RM 200 - RM 250, which includes an hour of massage that ends with sex. Pubs in major cities like Kuala Lumpur, Johor Bahru, and Penang have call girls who can be booked for around RM 300 - 1000 a night depending on the quality of the girls. Some Malay girls work in this industry, but it is rare to find any, as the punishment is usually death by hanging. Most prostitutes are from China, Vietnam, or Thailand and are usually there to earn a quick buck before heading home.[citation needed]