Refresh this page for more quotes on Falwell! 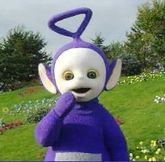 The horrid homosexual character pictured here is wanted by Jerry Falwell for leading children to enjoy rum, sodomy and the lash, with emphasis on "sodomy."

Scary Jerry Falwell (1933–2007) was an obnoxious christofascist segregationist[1] demagogue who spewed narrow-minded hatred at every chance, while presenting himself as a pretender to the homilies of one Jesus Christ (of course, Jesus is the Son of God, and God regularly kills or damns people who make him angry by using their freedoms and daring to not believe in a bunch of contradictory, questionably translated 2,000- to 5,000-year-old desert scribblings supporting a cult religion made up by a bunch of heatstroke-ravaged barbarians in Iron Age Palestine, so Jesus might have agreed with him).

As the creator of the Moral Majority, he seemed to take inspiration from Billy James Hargis's "Christian Crusade". The general impression among people who are not his enthusiastic supporters is that he was a worthless prick; however, it must be mentioned that he was not involved in the sex or financial scandals that was the downfall of many of his contemporaries.

According to Falwell you should save what little forgiveness you have as a Christian for Saint Ronnie's divorce.[3]

Falwell got his first big win in 1981, after the city of Washington, D.C., briefly decriminalized gay sex. Falwell successfully lobbied Congress to overturn the decision, warning that D.C. would become “the gay capital of the world.”[4]

He blamed homosexuals, neopagans, and feminists for the September 11 attacks — and not, say, Christians stirring up a hornet's nest in Muslim countries by maintaining a military presence in the Middle East and propping up oppressive dictators. He is also known for claiming that children's TV character Tinky Winky was a homosexual (for being purple, wearing a tutu, and carrying a handbag).[5].

Speaking of minorities, Falwell was also a leading anti-Semite, claiming that the anti-Christ was a male Jew and that "Jews can make more money accidentally than you can on purpose."[6]

Up your hole, with love, peace and soul[edit]

Falwell had a famous legal battle with Larry Flynt that went all the way to the Supreme Court, a fight that focused on a spoof liquor ad from Flynt's Hustler magazine in which Falwell talked about his first time having sex...with his mother...in an outhouse. The Supreme Court delivered a unanimous ruling in favor of Hustler and thus established a precedent that protects the right to parody public figures[7]. Falwell and Flynt later became friends when they discovered that they shared more in common than they realized, due to their similar Appalachian roots; Flynt even wrote a touching column about Falwell after he passed away.[8]

Oogie Boogie, is that you?[edit] 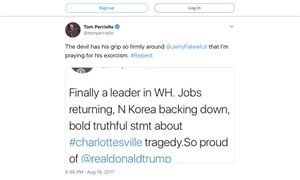 He was struck down died on May 15, 2007, proving that even God was tired of Jerry's claptrap.[note 1] After his death, Christopher Hitchens hitchslapped him to eternity on Anderson Cooper's CNN program.[10] The world moved on. De mortui nil nisi bene

Falwell's legacy is Liberty University. He rose to national prominence when his other school, Liberty Christian Academy, prohibited non-white enrollment and, thus, lost tax-exempt status.[11] L.U. is currently chaired by his son (1962–). We'll say this much, Americans automatically tune out any comments coming from a Falwell; however, we can't help but notice that Junior is rather svelte to the point of being unrecognizable compared to his bloated, bloviated, (thankfully) deceased dad. Looks like the kid's voraciousness is presently limited to money and God (in that order).[12]

Falwell Jr. was also the most prominent evangelical leader to embrace President-elect Donald Trump, showing that the lack of morality among the Moral Majority is intergenerational. There was concern that Trump may ironically have appointed him Secretary of Education, instead of someone just as bad.[13][14] Falwell Jr. says he was offered the education job but turned it down.

Junior fails to even understand basic Christian theology (Augustine of Hippo), because greed.[9]

Junior has been ruling LU with an iron fist, forcing faculty and students alike to not deviate from pro-Trumpist, far-right Christianity.[16] Junior has even been getting involved in promoting conspiracy theories (e.g. Hillary Clinton conspired with Russia to come up with the Steele Dossier

In August 2020, Falwell Jr. posted a picture to Instagram from a party on a yacht. In that photo, he revealed that he was a fan of the show Trailer Park Boys

(as he was dressed like one of the characters from the show), a fan of rum and coke "black water", and lastly, a big fan of posting selfies to Instagram with his pants unzipped, exposing his underwear choice of the day to the world.[18][19] This clearly violated Liberty University's dress code regulations, and violated Liberty's policy on drinking alcohol. A poster on Reddit calculated that if a Liberty University student was captured in the same scene, thanks to Liberty's strict social regulations, the student could possibly have accrued more than $9,000 in school fines and 900 hours of required service, and possible expulsion.[20] This was the last straw for many Liberty University faculty. 2020 was a year of controversy for Falwell Jr. – lowlights include flippant dismissal of COVID-19, calls for parts of Virginia to secede from the state, and a racist tweet that resulted in many Black employees and athletes quitting Liberty University.[20] But if there is two things that make evangelicals really uncomfortable, it is alcohol and sex. This picture contained both. Subsequently, the outrage was widespread in the evangelical community itself.[20] Consequently, Falwell Jr. took an "indefinite leave of absence" from the university.[21]

The Falwells had also engaged the services of Michael Cohen, Trump's disgraced personal lawyer, to keep a number of incriminating photographs from the public.[26]

On August 24, 2020, Falwell Jr. resigned as president of Liberty University, and withdrew from the university's board or directors.[26][27]