From RationalWiki
Jump to: navigation, search
Not to be confused with the Reform Party. 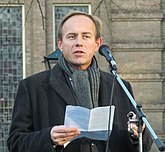 The Reformed Political Party (Dutch: Staatkundig Gereformeerde Partij or SGP) is a Dutch Protestant party (the Reformed refers to Calvinism, as in "Reformation"). They're very fundamentalist on religious issues, but mostly mainstream centre-right on other issues. Unfortunately, every time they happen to be in a position to push a viewpoint, they almost always focus on the religious stuff.

The SGP has been around since 1918, making it the oldest party in the Netherlands. It's a small party (and always has been), usually holding 2 or 3 seats (out of 150) in the lower house, 0 to 2 seats (out of 75) in the senate, and some seats in various municipalities (where they often run together with another—more moderate and centre-left—Christian party, the ChristianUnion

2010 vote counts (per municipality). Sadly, the US isn't the only country with a Bible belt.

The SGP does not like women; or rather, prefers that women just take care of the children and stuff; the rationale behind this is that "both man and woman have been given their own purpose and place by God".[2] For this reason the SGP opposes day care for children, since children should be raised by their parents.[2] What they really mean of course is that women should stay at home and take care of the children.

Until 2006 women were not allowed to become members of the party, the only reason this was changed was due to a lawsuit and threat to stop all government funding. Since 2013, women have also been allowed to vote in internal SGP elections, and able to run as candidates. This change again required a lawsuit, and a threat to stop government funding. Somewhat surprisingly, in 2014 the first SGP woman actually got elected in municipal elections. Unsurprisingly, the SGP also opposed universal suffrage for a long time, but finally accepted women's right to vote in elections in 1989.

In response to Todd Akin's rather ... interesting ... views on rape, the SGP leader Kees van der Staaij confirmed that "it's a fact" that the chance of pregnancy after rape is "very small" but "not impossible".[3] Unlike Akin, however, van der Staaij didn't suggest that some rapes aren't really rape, and went out of his way to call rape "terrible". It's strange that a party that's significantly more fundamentalist than the GOP is less vile and more compassionate (which should tell you a thing or two about the current GOP).

SGP seats; they get points for consistency.

SGP membership; the increase is not necessarily indicative of greater success; only a small number of the population (308,846, or about 2%)[4]) is member of a political party. It's more likely a sign of increased loyalty among SGP voters.

Dutch politics has always been fairly fragmented; the 150 seats of the lower house are typically divided between about ten parties (typically with three or four large parties and six or more smaller ones), and getting the majority vote to pass bills may require trading favours in quid pro quo fashion with smaller parties (in common parlance this is often called trading cows). This allows the SGP to influence matters, typically not in a good way.

Here are some of their greatest achievements of the last few years:

To be fair, most of their other (non-religious) views not listed above are more or less reasonable and roughly in line with mainstream right-wing politics in Europe, but whenever they have the chance, they focus on the religious issues. For example, their positions on the Sabbath and blasphemy are repeated ad nauseam, boring much of the Dutch electorate.