An artist's depiction of DID

Dissociative Identity Disorder (formerly known as Multiple Personality Disorder or Split Personality Disorder) is a mental illness in which an individual manifests at least two distinct and enduring personality states. It is also one of the single most controversial and contentious mental disorders in the field of psychiatry, with professional opinion being heavily divided as to the causes and veracity of the disorder.

In popular perception, dissociative identity disorder is often confused with schizophrenia. Many analogies to conflicting personalities or styles are often called "schizophrenic" but this is wrong. Schizophrenia is characterized by hallucinations, paranoid delusions, and disorganized thought, but not by multiple personalities.

The Diagnostic and Statistical Manual of Mental Disorders diagnoses someone with Dissociative Identity Disorder if they exhibit:

Both the veracity and causes of DID are a highly contentious topic within the psychiatric community. The two major schools of thought that have emerged in regards to the disorder are the post-traumatic model, which posits that symptoms are the result of the individual's psyche fracturing into multiple, distinct personality states in response to childhood trauma or abuse[1][2][3]; or the sociocognitive model, which suggests that symptoms are the result of sufferers behaving in a manner that conforms to existing cultural stereotypes and unwitting cues from therapists using improper methods.[4]

A history of childhood trauma or neglect is indeed a very common feature in individuals diagnosed with DID,[5] however it is always important to remember that correlation does not imply causation.

While this debate is often simplified into an argument over whether the disorder is "real" or not, the debate is actually more complex and encompasses a variety of positions between these two extremes. For instance there are many proponents of the sociocognitive model that believe there is a common, legitimate disorder amongst those diagnosed but that many of the symptoms associated with it are the result of outside or cultural influence.

Some skeptics (including doctors) have argued that DID cannot be considered a diagnosable disorder and should be removed from current versions of the DSM.[6] They believe that patients may be faking it, may have false memories, or may be highly suggestible (thus believing they have multiple personalities when they don't.)[7] Proponents of the disorder's continued recognition have pointed out that the those diagnosed with the disorder have not been demonstrated to be more suggestible or prone to fantasies,[8] and that phasic treatment consistent with expert consensus guidelines has shown improved outcomes for sufferers compared to treatment that does not directly engage with DID self-states.[9]

Fueling the controversy surrounding DID is the history surrounding its rate of professional diagnosis and scientific literature supporting the disorder have seen marked increases in the wake of media portraying the disorder such as The Three Faces of Eve, Sybil and its subsequent film spin-off in the 1970s. Sybil was the pseudonym of Shirley Mason, a woman who claimed to have sixteen personalities. The release of further documentation, such as tapes of the therapy sessions, demonstrated that Mason's therapist had encouraged her to manufacture multiple personalities and engaged in questionable practices such as hypnosis and barbiturate injection.[10][11]. Reviews of the scientific literature show a pronounced explosion of interest in the 1990s, followed by a slow "cooling off" period in the following decades[12].

The DID epidemic later played into the recovered memory therapy craze and Satanic Panic of the 1980s. Since the 1990s, many DID specialists have been sued for malpractice and specialist clinics have been closed down.[13]

Another problem presented by DID is that scientific literature discussing it has largely been confined to North America and the English speaking world,[14] though there has been research to suggest that symptoms associated with the disorder have been recorded in other culturesDissociative disorders in DSM5DMS (vol 28, pg E17, 2011)</ref>.

While the exact nature of DID remains a matter of contention, research suggests that there are measurable differences in the physical structure of the brains of people with DID when compared to normal controls.[15] Brain activity associated with DID is also different than in people without it, including those prone to fantasies.[16]

Movies like Split, Psycho, and Identity portray people with DID as violent, further stigmatizing a group of people who may be in great need of help.[17]

But people with DID are not necessarily more violent than others. They're more likely to hurt themselves than to pose a threat to other people.[18] 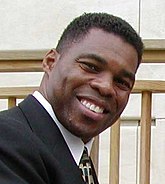 Herschel Walker, a sports player with DID

It is notable that some "plurals" do not consider their condition to be a mental disorder so much as a natural state of being,[19] much like the autism rights movement. This subcommunity, known as the endogenic or parogenic community, rejects the idea that DID must be the result of either childhood abuse or the induction of false memories, and argues that their condition is considered a mental illness only because society has branded it as one. Thus they reserve the term "DID" for dysfunctional systems. Plurals by and large prefer the term "headmates" or "systemmates" for entities sharing a body, on grounds that "alter" is derogatory toward personalities other than the one who happens to be "in front" the most.[20]