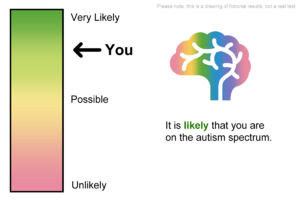 One or two online tests don't make it official.

Self-diagnosis, as the name would suggest, is when one attempts to diagnose oneself or family and friends when experiencing certain symptoms, typically with the help of symptom checkers or lists of symptoms found in books and, increasingly, the internet. With the proliferation of social media, this may also include symptoms provided in viral social media posts.

Symptom checkers may be useful for finding what one should do (e.g. whether to go to a pharmacy, book an appointment with their doctor, call an ambulance, etc.), but in and of themselves they are useless and potentially dangerous as they may result in the individual using ineffective treatments whilst snubbing help which is effective. Alternatively, the nocebo effect may make the person's condition feel even worse, resulting in them worrying more than is necessary.

The problem with this is that even when the symptom checker one is using is from a trustworthy source, the vast majority of people have no medical training and thus may have difficulty noticing things that a professional doctor or nurse may notice (it doesn't help that some different diseases may have similar symptoms) and also may not have access to equipment which may help them determine the cause of the symptoms.

Psychiatric self-diagnosis is popular. People are more likely to diagnose themselves with mental conditions such as:

More far-fetched examples include self-diagnosing with dissociative identity disorder, or self-diagnoses that otherwise include existential woo such as "otherkin" and "therian" identities (which are not supported by scientific evidence), and other purported phenomena such as indigo children. While some otherkin people openly admit they're just doing it for fun or to cope while they're going through a hard time, other times these people are serious.

Some people self diagnose simply because they lack opportunity for a formal diagnosis, there is stigma in seeking aid, or because other people refuse to help them. For example,

In these situations, a change of circumstances (like a more understanding doctor or better health insurance) may lead to the person getting an accurate medical diagnosis.

And then other people have less logical reasons for self-diagnosing.

People who self diagnose may be mocked, especially online. Unfortunately, this can mean that teens who don't know any better, or people who actually do have a mental illness or disability, may be targeted unfairly.

Self-diagnosed people may also be accused of harming people who have been professionally diagnosed with various disabilities and conditions, and of causing these people to not be taken seriously (Though some of these real disabled people have pointed out that they aren't taken seriously in the first place[5]).

Stemming from this, harassment over whether someone is faking an illness or disability is an issue on social media.[6] Professionally diagnosed autistic people can be harassed over the validity of their diagnosis if they defend self-diagnosis.

It's worth pointing out that without a paper diagnosis, people can't access special resources at school or work, so they aren't taking away anything from people with confirmed disabilities.

Some communities show support and acceptance towards people who self-diagnose such as certain neurodiversity communities. This is more common in cases where a diagnosis can be difficult to obtain (e.g., autism), or where mental health resources are poor or cost-prohibitive (e.g., inadequate coverage under one's insurance in the United States).

Autistic adults, for example, tend to embrace self-diagnosed autistics as part of their community, assuming that the person is likely autistic but unable to access appropriate resources at the moment.[7] There is some logic behind this. For example, one clinician found that 88% of people who thought they were autistic received an autism diagnosis.[8] Thus, someone who thinks they are autistic is probably correct. Although this can be argued to be more related to the fact that in recent years, rates in autism diagnosis have been consistently going up and could be been perceived to be due to the overdiagnosis of the condition.[9] It also is relatively controversial in the autism advocacy community for self-diagnosis to be seen as a valid means of diagnosis, in that it could risk neurotypicals identifying with the condition, and may end up minimizing or misrepresenting the actual struggles individuals who actually have the condition as well as their needs and desires. [10]

People who self-diagnose are sometimes accused of being attention-seeking snowflakes.[11] While that may be a matter of opinion, some go further by accusing those who self-diagnose of having factitious disorder (formerly known as Münchhausen syndrome), a condition listed in the DSM-V in which a person fakes illness in order to receive sympathy. With the rise in popularity of TikTok and other short-form social media, the more common terms used are the less formal "Münchhausen by Internet" or "Digital Factitious Disorder (DID)"[12]

However, people with factitious disorder -- at least offline -- are more likely to lie and say that they have a professional diagnosis when they do not.[13][14] People who self-diagnose tend to be honest about it.[citation needed]