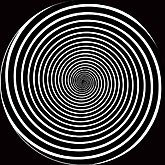 Hypnosis is a mental state of relaxed consciousness, a splitting of consciousness, a role enactment, a nondeceptive placebo or something else,[1] there is no scientific consensus yet. This means that it can be a bit hard to talk about hypnosis, as it almost have no solid definition. Some people have taken this to mean that they can apply any whack explanations or functions to hypnosis, such as mind control, recovering memories or access to "higher mental states".

Hypnosis is usually defined as an altered state of consciousness, although some scientists reject this notion and it has been criticized on the grounds that no markers for a hypnotic state have been found.[2] There is also question whether hypnosis exists at all.[3] Hypnosis is experienced at times by nearly all human beings. For example, people often lapse into hypnosis while driving (highway hypnosis

) — part of their attention remains focused on driving and reacts appropriately to external needs, but their mind wanders to other subjects. When they return to full alertness (suddenly or gradually), they may realise that they cannot remember any of the past few minutes, although in fact they were driving safely throughout. Some people experience hypnosis much more frequently than others, and similarly some people may be more susceptible to being hypnotized or to suggestions made under hypnosis than others, which is something known as hypnotizability

Hypnotism is the act of inducing hypnosis in another person (or, in some cases, a chicken

). Visual focus points, such as the clichéd swinging pendulum or watch, are rarely used.[note 1] Usually the client focuses on the hypnotist's voice while he or she talks them through a mental visualization, such as walking slowly down a series of steps into a deeper state of relaxation. The client retains their free will and is not under the hypnotist's command, and the degree of influence the hypnotist exerts over the client will vary depending on the nature and purpose of the hypnotism and the suggestibility of the client. Unfortunately, classic pocket watches cannot be used as unerring mind control mechanisms like in the movies; however, they can be used as part of a hypnotic induction.

Hypnotherapy refers to a variety of therapeutic disciplines involving hypnosis. While some forms of hypnotherapy are regulated by professional bodies and qualifications, the use of the term "hypnotherapy" itself is not fully regulated. Thus, in many countries, anybody who can hypnotise clients (which is a fairly simple skill to learn) and who claims to offer some form of therapy, can concatenate those two words together and call themselves a hypnotherapist. Hypnotherapy is generally considered complementary/alternative therapy and is not widely endorsed by the medical and psychiatric community as a primary therapy. It can also be used successfully as a complement to other forms of therapy as it can make the patient feel more relaxed and open.[4]

This is a form of psychoanalysis using hypnosis, in which the client explores their thoughts, emotions and memories under hypnosis. In many cases this involves the retrieval of supposedly repressed memories of traumatic experiences, usually from childhood. Analytical hypnotherapy is particularly effective for deep-rooted problems such as phobias and some personality disorders,[citation needed] but should only be undertaken by competent trained professionals.

In this dubious 'therapy', clients are also encouraged to retrieve repressed memories while under hypnosis, but the memories are ostensibly from a 'past life'. This may be undertaken on the pseudotherapeutical basis that events in a former life are influencing patterns in the client's current life. Or the client may just be curious about who they were before they were themselves, as it were. Memories of past lives can never be conclusively proven or disproven, and claims made about past life regressive rest heavily on clients' convictions that what they have 'remembered' is real. Similar to hypnotic regression that reveals details of alleged alien abductions, these therapies rely heavily on suggestions by the hypnotist, who can prompt the subject. Critics have pointed out how it's interesting that almost everyone who has undergone such therapy turn out to have led interesting lives, often at the sides of famous historical figures, completely ignoring any relatively boring or unglamorous cases where they find themselves dying of plague in a gutter. This may just be a response to the selective reporting of "interesting" regressions, however. In an episode of Penn & Teller: Bullshit! where this sort of hypnotherapy was shown, Penn Jillette thoroughly mocked the bad French accent by a subject who was claiming to be in the court of Marie Antoinette.[6]

There are some possible risks involved in hypnotism. One is that the greater access to the subconscious mind can sometimes enable repressed emotions or memories (often traumatic) to be brought to the surface. Analytical hypnotherapy often focuses on achieving this result. As with any other type of talking therapy (or even in many aspects of daily life), it can also sometimes occur accidentally during other forms of hypnotism, where the hypnotist (such as a stage hypnotist or hypno-anaesthetist) may not have the psychiatric knowledge to deal with this situation, and the experience may have long-term psychological effects on the client.[7]

Another problem (as with any form of regression therapy) is that the "repressed" memories which come to light may often not be conclusively proven. In some cases genuine memories are discovered (though hypnotherapy is not necessary for old memories to be rediscovered). In some cases, however, the recovered memories are questionable and may be a creation of the client's own imagination, or confabulations. Sometimes the client may have been guided towards certain kinds of 'memories' by the suggestions of an eager therapist. Controversial cases include clients' claims to have recovered memories of childhood sexual abuse, and these have sometimes been used as testimony in court cases, although their validity as legal evidence remains disputed.[8][9] Many innocent people have been convicted and family relationships have been ruined due to this.[10]

Hypnotic techniques are used for varying purposes by a wide range of practitioners, ranging from clinical therapists, to alternative therapy quacks, to mind-controlling cultists. The major branches of hypnosis and hypnotherapy are as follows.

This is the simplest and probably the most common form of hypnotherapy, and involves making positive suggestions to a client, which have a greater impact on the mind due to hypnosis. It is similar to cognitive therapy in that it addresses thought patterns rather than analysing deeper causes. Post-hypnotic suggestion can be effective for dealing with self-confidence or self-esteem problems, for assisting in weight loss, or for helping clients to give up smoking or other addictions or compulsions. However, some individuals experience more success than others, and there is a lack of comparative research to determine whether it is more successful in addressing these problems than other techniques. 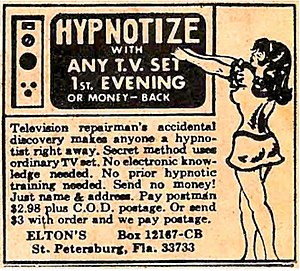 The dark side of post-hypnotic suggestion. In command hypnosis, the suggestions are more forceful and repeated, often combined with other brainwashing techniques, with the intention to change the client's beliefs, attitudes, emotions, perceptions or memories. Command hypnosis is among the techniques used by Scientologists to manipulate new converts during its "auditing" process.[11] There have been several cases where crimes, including murder, may have involved hypnosis.[12]

Stage hypnotism uses a milder form of command hypnosis for entertainment purposes. It is often a fairly crude form of comedy where volunteers are made to ridicule themselves by acting like an animal or impersonating a celebrity. Recently hypnotism and other suggestion techniques have been used in more thought-provoking ways by performers such as Derren Brown and Jan Hellesøe, who aim to expose the kinds of trickery used by fraudulent mediums and cultists.[13][14] There is some suggestion that exorcism may be largely stage hypnosis.[15]