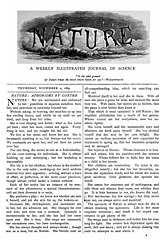 Nature is a premier British[1] peer-reviewed scientific journal, first published in 1869. Along with Science, the flagship journal of the American Association for the Advancement of Science (or AAAS for short), it is one of the top two most prestigious journals in the world, and the most cited — having the highest impact factor of all journals.

Unlike most journals, which are highly specialised, Nature is one of the few that still publishes a wide range of science from all valid disciplines. The rate that papers are accepted into Nature is about 1 out of every 10 submissions — and papers are only submitted if the authors think that they even have a chance of being published.

In 1974, Nature published the results of experiments performed by physicists Targ and Puthoff, who studied Uri Geller and were convinced his psychic powers were real.[2] The editors preceded the article with their own disclaimer, something the magazine hardly ever does.

In the 1980s, Nature published work by Jacques Benveniste that appeared to show that homeopathy worked. As the paper was well-written and passed peer review there was no objective reason to reject the paper; thus putting away conspiracy theories that say alternative medicine is completely shunned by mainstream scientific groups. The paper was published on the grounds that the experiments were being repeated under the supervision of a team from Nature, which included illusionist James Randi who would be there to spot any sleight of hand — famously taping samples to the ceiling to enhance the randomisation and blinding process. Under these conditions, the experiment turned out to be negative and due entirely to the bias of a single individual in the lab (although not outright fraud). The editor of Nature at the time, John Maddox, was nevertheless disappointed in not being able to publish completely Earth-shattering results, stating "I'm sorry we didn't find something more interesting."