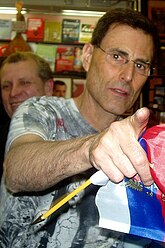 I want YOU to give me spoons to bend!

Uri Geller (1946–) is an Israeli magician and mentalist who, for the last fifty years, has made a career for himself posing as a psychic.

He was born in Tel Aviv, then under British rule in Palestine but soon part of Israel. After military service as a paratrooper including in the 1967 Six-Day War, he became a stage entertainer, manipulating metal (he would later become popularly associated with bending spoons), making clocks run faster and slower, and viewing hidden drawings - common magic tricks but which he attributed to psychic powers. Despite repeated debunkings, he has made a career out of it ever since. In the mid 1980s he moved to Berkshire, England.[1] He has continued to make ridiculous or unverifiable claims, including saying he could use his psychic powers to stop Brexit (he didn't), and claiming to have moved a ship blocking the Suez Canal in 2021. He also apparently makes a lot of money dowsing for oil and minerals.[1]

Geller was effectively discredited by, among other things, a 1973 appearance on The Tonight Show with Johnny Carson.[2] Geller failed to bend spoons that Carson, an amateur magician in his own right, had (with the help of James Randi) chosen beforehand, and to which Geller did not have access.[3]

He was a focus of much paranormal research during the Human Potential movement[4] of the 1970s, including a well-known study at the Stanford Research Institute that claimed to validate his powers. Geller is notoriously litigious, and has on many occasions attempted to use this study (considered flawed at best by experts on magic and pathological science) as a cudgel in court against his opponents, particularly against Randi.[5] Despite this, Geller typically loses in court battles.

It has been commented by some, including skeptical writer Martin Gardner (who was well-trained in magical techniques), that Geller's magic is rather amateurish and mediocre, and that his entire reputation rests on the assertion of psychic powers, allowing him an out if a trick fails, something that happens often in the presence of a skeptical audience. Geller has of late had a career as a reality TV star, being embarrassed on his Israeli TV show The Successor for getting caught using a fake finger gimmick to rig a "psychic" demonstration, and later being embarrassed on the American version, NBC's Phenomenon, when co-judge (and legitimate magician) Criss Angel called out both Geller and a contestant claiming psychic abilities with a sealed envelope, the contents of which neither would attempt to divine.[note 1]

Geller's early career has been extensively documented in the skeptical literature, particularly Martin Gardner's Science: Good, Bad, and Bogus ISBN 9781573920568, James Randi's Flim-Flam! ISBN 9780879751982 and The Truth About Uri Geller 9780879751999, and William Poundstone's Big Secrets ISBN 9780688048303. In recent times, Geller has become sort of a professional hanger-on, associating with credulous celebrities (including Chabad Rabbi Shmuley Boteach and, at one point, Michael Jackson), as well as investing in soccer teams in his adopted home of the United Kingdom and running them into the ground.

For around twenty years, Geller wanted you to believe these were the same.

Nintendo has avoided using the Pokémon "Kadabra" in their media for some time, fearing lawsuits from Geller. Geller believes Kadabra to be a libelous mockery of his image,[note 2] complete with "anti-Semitic" symbols (a star on the forehead, probably an occult reference, and chest lines similar to the runic insignia of the SS) The trading card game has not printed a Kadabra card since 2003, despite Kadabra being an evolutionary link between Abra and Alakazam. In order to get around this problem, recent Abra and Alakazam printings regard Kadabra as a completely optional step in the evolutionary chain. Thanks Mr. Geller, we couldn't have done it without you.

It seems like Uri Geller finally changed his mind on this one in 2020 (several years after the Kadabra reappeared in Pokemon Go).[6]

In 2009 he bought a small uninhabited island off the east coast of Scotland called The Lamb. There are various nonsensical mystical theories about this island. Firstly, it lies in a triangle formed by three sites associated with the Knights Templar: Rosslyn Chapel, the Isle of May, and the village of Temple in Midlothian. For some reason the Knights Templar are viewed as having vast mystical powers. Secondly, along with the nearby islands of Fidra and Craigleith, it forms a shape which allegedly resembles the layout of the Giza pyramids and the layout of the stars in Orion's Belt (a fringe theory holds that the pyramids match Orion's belt). Pseudo-archaeology researcher Jeff Nisbet claims that "anyone standing on the battlefield of Bannockburn, where Robert the Bruce defeated the English army in 1314, on the anniversary of the battle on June 24, would see the three stars (Alnitak, Alnilam and Mintaka) rise exactly over the three islands of Craigleith, Lamb and Fidra".[7][8][9] Whether you can even see the islands from Bannockburn, near Stirling, is unclear[note 3], but it sounds like the worst sort of Celtic or Scottish nationalist pseudohistory.

Geller has suggested that The Lamb was visited 3000 years ago by Princess Scota, the sister of the pharoah Tutankhamen, who supposedly fled Egypt and stayed there for a while (despite the island being tiny, rocky, and not far from the Scottish mainland), doubtless leaving behind lots of treasure. He announced plans to excavate the island to find the treasure, in a speech at the Scottish Seabird Centre in North Berwick (which is incidentally a must for fans of puffins). In 2010 he announced he was visiting to do some dowsing.[10] Since then, he has fallen quiet, which suggests no treasure was found, or that he has - like many other older humans - retreated to a life of introversion and solitude, perhaps no longer interested in continuing to be "Fake". It seems his prior lifestyle was quite profitable.

The nearby island of Fidra is considered to be one of the inspirations of Robert Louis Stevenson's novel Treasure Island. It seems Geller has taken it all rather literally, and may soon be found roving the island in a dishevelled state muttering about cheese