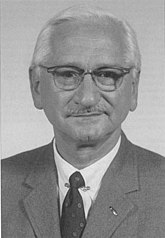 Albert Bruce Sabin (August 26, 1906–March 3, 1993), born Abram Saperstein in Imperial Russia, was an American scientist best known for his development of the oral polio vaccine in the early 1960s. The oral polio vaccine (OPV) largely replaced the Salk vaccine which was injected (IPV). Given his East European heritage Sabin maintained some contacts with Soviet scientists and was able to test his vaccine in the Soviet Union. Additionally, he worked on other vaccines for things like dengue fever.[1]

A medical researcher and pathologist, from 1955 to to 1963 Sabin and other researchers tested their vaccine around the world while developing nations were taking advantage of the existing vaccine. Sabin felt his cure was better due to ease of administration and its ability to target polio in the intestines in a way the Salk vaccine did not. Some controversy would, and still, exists over which of the two vaccines is superior.[2]

In the late 1950s polio had largely been overcome in the United States but was a still a problem in other less-developed nations.[3] In spite of Cold War tensions, fear of polio was strong enough to get the USSR to accept medical aid from the materialist-imperialist West. About 100 million people in communist Eastern Europe received the Sabin vaccine and the disease was wiped out.[4] By 1963 the Sabin polio vaccine was seen as safe in the United States.

The Polio Wars: Salk vs. Sabin[edit] 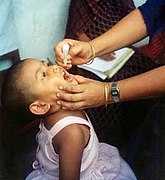 The oral polio vaccine remains common in the developing world.

There was something of a rivalry between Salk and Sabin. Indeed, the medical community in general were not huge fans of Salk for his somewhat unconventional methods and willingness to bask in the limelight after his cure was unveiled in the early 1950s.[5] The Salk vaccine was killed poliovirus administered via injection while Sabin's was a weakened version of the virus given by mouth. Most researchers prior to the Salk vaccine felt a killed-virus serum wasn't possible and could not be effective. During his lifetime, Sabin staunchly defended his live-virus vaccine, refusing to believe any evidence that it could cause paralytic poliomyelitis. Salk, for his part, believed that killed-virus vaccine produced equivalent protection in individuals and in communities without any risk for causing paralysis. Despite Sabin's belief, the risk for paralysis from the live-virus vaccine does exist, although it is slight. In 1999 a federal advisory panel recommended that the United States return to Salk’s vaccine because it cannot accidentally cause polio.[note 1] On the basis of a decade of additional evidence, this recommendation was reconfirmed in 2009.[6]

Struck with calcification of the spine in his later years, Sabin went on to study chronic pain in hopes of helping others alleviate it. Surgery in his mid-80s relieved him of his suffering, but sadly, he passed away within about one year.