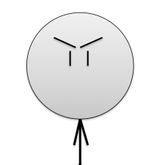 "Stick figures are a special species. We don't need to eat because we're too fucking awesome!"[1]
Professor Stick is a demon[2] a wizard[3] an atheist and skeptic YouTuber who became popular from a video titled "Flat Earther Tries to Debunk Me on the Solar Eclipse",[4] which was a response to a flat Earth video by Bro. Sanchez, an unbelievably well-known and popular YouTuber in the Flat Earth community. The video received over 951,000 views.

Professor Stick's channel is dedicated to promoting secularism, reasoning, education, science, and debunking pseudoscience on the internet. Most of which consists of debunking/responding to videos promoting creationism, flat Earth, medical woo (primarily on cancer woo), anti-vaxxers, Christian fundamentalists, and Islamism. As of April 2020, Professor Stick's YouTube channel has over 200,000 subscribers and over 31 million views.[5]

See the main article on this topic: Abortion

Professor Stick is pro-choice and has been highly critical of pro-lifers. On April 2017, Stick did a collaboration video with atheist YouTuber, Godless Cranium, in response to Hunter Avallone's video on abortion.[6]

Professor Stick responded to several people claiming about "the dangers of vaccines" and "how it's safer to not have your children vaccinated" mostly with what they say is "supported" by pseudoscientific doctrine and unfounded claims.[7][8][9] Stick also said that anti-vaxxers are the second type of ignorant people whom he hates after global warming denialists.[10]

Professor Stick has a degree in biology[11] and has spoken against creationism multiple times in videos refuting creationist claims. In fact, the first video on his channel was called A Creationist's Worst Nightmare, which is a response to creationist nutjob Kent Hovind's video that was mostly filled with irrelevant things in a dismal attempt to blame the failures of the American education system on atheism and the teaching of evolution.

Another creationist whom Stick responded to was Richard Kent, who tried and ultimately failed to explain how the Second Law of Thermodynamics is evidence for creationism against evolution[12] and how fossilization doesn't occur over millions of years, but instantly. Therefore, Noah's flood.[13]

See the main article on this topic: Cancer

Professor Stick has made many videos to those claiming a purported cure for cancer. One of his most well known videos was Stick responding to Dr. Antonio Jimenez of Hope4Cancer, where Dr. Jimenez claims that "Vitamin B17" (laetrile) can cure cancer.[18] Stick's video ended up receiving a lot of backlash in the comments section.[19]

See the main article on this topic: Flat Earth

Professor Stick has mentioned that many video requests he's received were about Flat Earth.[20][21] In the videos he does make about Flat Earth, a lot of them were about calling flat earthers out on their crankery. In one of his earliest Flat Earth debunking videos, he tackles lies created by rapper, flat earther, conspiracy theorist, and professional liar Matthew Procella, a.k.a., ODD TV[22] in a video calling Flat Earth the most cringe-worthy conspiracy ever.[23]

In that video, Procella made these claims to be "evidence" of a Flat Earth.

Some other pseudo-intellectual flat earthers whom Stick has responded to are Orphan Red[24][25], Jake the Asshole[26], Darrell Marble, aka, D. Marble,[27] Flat Earth Talk[28], Delano Edwards[29], and other less notable ones.

See the main article on this topic: Religion

Professor Stick frequently tackles Christianity and Islam on his channel.

Some of the videos that he responded to were on PragerU's nonsense.[30][31][32] Some other various topics that Stick responded to dealt with the claim that "Christianity is not a religion"[33] and the relation with science and Jesus.[34]

On July 2016, Professor Stick made a video asking Muslims these questions: