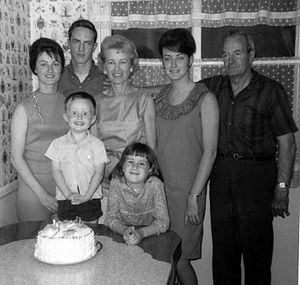 The nuclear family refers to a family with constant meltdowns typical Western family consisting of a father figure and a mother figure (of the male and female genders, respectively) and a couple of little kids (at least 2) running around. The nuclear family was the all-American Dream of the '50s: a working father, a stay-at-home mother, little Susie and Billy gettin' B's at school and the family dog Skipper eating mom's home-baked pies before the kids get in. These families are exemplified by such horrific sitcoms as The Adventures of Ozzie and Harriet and the abominable Leave it to Beaver. Not even outer space was safe with the nuclear family of Lost in Space.

The purported "downfall" of the nuclear family is an illusion, since the "nuclear family" as a mainstream model only ever existed in the minds of conservative Americans, trying to frame a world where their ideals were the norm.

The reality is that for most of human history (and throughout every culture) families are what happenstance tosses together, generally including the mother and father, the children, and grandparents who acted as the primary caregiver while the mother and father were trying to get enough food to feed everyone. Throughout most of human history, it would not be uncommon to see single parents needing to raise children, or adult siblings living together to better support the household, the farm, the king, or whatever other need presented itself.

But for a few short years, the conservative world view ruled (at least on TV), until the sexual revolution of the 1960s and rock 'n' roll music brought a shocking end to that sweet illusion. Today, families come in all kinds of Weapons of Mass Destruction, not just Nuclear, including gay couples or singles who've adopted kids, one-parent families created not just by circumstance but by choice, and, thanks to the modern economy, a return to adult children living at home.

So clearly, the destruction of the nuclear family is therefore the fault of the liberal agenda.

This sociology-related article is a stub.
You can help RationalWiki by expanding it.