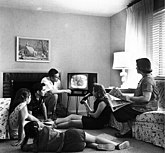 Ah, the Fifties in America, where life was good for wealthy whites and no one else.

A golden age is a mythical time period which is held to be the ideal state of humanity. In a smaller sense, it is used by many cultures when they idealise a particular period of their history - usually one of great prosperity, military power, territory or creativity. In its most reduced form, it can be seen in an inclination to think fondly of "the good ol' days," when life was simpler. It may be noted, however, that such thinking vanishes like a morning mist when the subject at hand is medicine.

The most well known golden age is the story of Adam and Eve, who lived in a beautiful, peaceful garden but fell from grace due to temptation. It is also found in Hesiod

writing around 700 BCE whose Works and Days

's Metamorphoses (8 CE) has a similar scheme of Gold, Silver, Bronze, and Iron.[1]

Modern idolisations of the past are sometimes harmless - Tolkien was a peddler - but the theme is also an undercurrent of nationalism. A desire to turn back the clock on social development is a continuing part of conservative thinking - George H. W. Bush's quote that "we need more families like The Waltons and fewer like The Simpsons" being a prime example.

The Arthurian legends are an idealized version of the "age of chivalry," when anyone who wasn't a king or a knight was covered in dung bravery and honesty were the standard of behavior and people fought dragons and rode around on white horses and somehow were still interesting. Never mind the fact that Arthur, if he existed at all, was a 5/6th century Celtic warlord and therefore predated every institution associated with chivalry by the best part of half a millennium — and even then, that same modern conception of "high medieval chivalry" was fabricated outright in Victorian England.[2]

The American Revolution was a high point of political and scientific thought, when "the loudest yelps for liberty [came from] the drivers of negroes,"[3] and an uprising of people who didn't like paying tax led to independence, and equal rights for all white, male landowners. The late 19th century was also a golden age, except for the banking crises, the KKK and whatnot. There was definitely nothing wrong with the 50s, though, the highpoint of Protestant hegemony before it all went to H-E-double-hockey-sticks in the 1960s.[4]

The Ancient Romans loved harping about the "ways of the forefathers" and how they lived "simpler lives" unburdened by luxury; with Virgil and Ovid amongst those popularising the concept.[5] Ancient Rome is interesting in both its surprisingly modern society at times and its über-conservative reactionary ruling class that would probably have gone back to the caves if they could have taken their slaves. Another favorite was decrying "femininity" in men that could express itself in wearing expensive garments, not killing enough people in war or loving a woman too passionately. Of course none of this ever happened in the "good old days" whenever they may have been.

Among comic book aficionados, the Golden Age stretched from 1938 (the year of Superman's debut) to 1950 (the year Justice Society of America ended). A Silver Age followed in 1956, ending around 1970. After that came the Bronze Age, ending in 1986. One might assume they are at the Nuclear Waste Age by now, commonly called The Modern Age of Comics.

In the former East Germany, there is a movement known as "Ostalgie" among people with a soft spot for the German Democratic Republic.[6] Conveniently forgotten are things like the Stasi, Berlin Wall and that time when the whole country nearly ran out of coffee

In the 2011 film Midnight in Paris, the main character Gil Pender is magically transported back in time each night from 2010 to the 1920s during France's Années folles, a period of which he considers to be Paris's Golden age. He hangs out with the historical figures of the era including Ernest Hemmingway, F. Scott Fitzgerald, and Salvador Dali, and develops a romance with a woman named Adriana. Near the film's climax, the Gil and Adriana travel back in time via carriage to the Belle Époque, an era Adriana considers Paris's Golden Age. They travel to the Moulin Rouge where they meet Henri de Toulouse-Lautrec, Paul Gauguin, and Edgar Degas. Gil asks what they thought the best era was, and the three determine that the greatest era was the Renaissance. The enthralled Adriana is offered a job designing ballet costumes and proposes to Gil that they stay, but Gil, upon observing that different people long for different "golden ages", has an epiphany and realizes that despite the allure of nostalgia, any time can eventually become a dull "present", so it's best to embrace your actual present.