is the family of the orchids, a diverse group of flowering plants

Orchids are among the original "complex contrivances" in biology that astounded naturalists. Their pollination mechanisms often involve Rube Goldberg-like complexity. As such, they are often used as examples of irreducible complexity (IC) by creationists. However, even Charles Darwin was well aware of orchid complexity and of the IC argument. The first book Darwin published after the On the Origin of Species (1859) was On the various contrivances by which British and foreign orchids are fertilised by insects(1862), also called Fertilization of Orchids.[1]

Ramírez et al. (2007) hypothesized orchids must have evolved at least 15-20 million years ago, during the Miocene, based on the finding of amber containing an extinct species of stingless bee, Proplebeia dominicana, that was carrying pollen of a previously unknown orchid taxon.[2]

Genetic sequencing indicates orchids may have arisen 76 to 84 million years ago, during the late Cretaceous.[3]

And according to Chase et al. (2001), the biogeography and phylogenetic patterns of Orchidaceae show it may be up to ca. 100 million years old.[4] 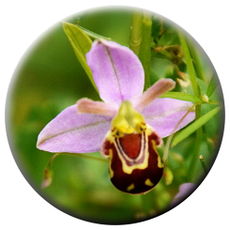 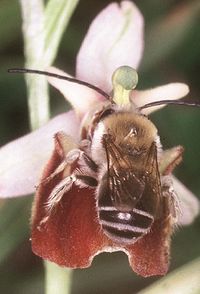 Most species of the genus Ophrys ("eyebrow") imitate the female form of their specific pollinator, usually a bee, or a wasp, sometimes a large fly, or a beetle. This visual lure is enhanced by the production of pheromones which mimic the female sex pheromones of that insect.[5]

The labella of Paphiopedilum species are modified into pouches. Flies or bees are lured into the pouch due to the bright colors of the flowers, try to land, fall into a fluid-filled bucket, and in the process of climbing out of the pouch, the hapless pollinator gets the flower's pollinium (pollen packet) glued to its abdomen (or elsewhere).

This "contrivance" is the most commonly cited as evidence for IC, since it's a multistep process.

The bizarre Catasetum orchids produce either male or female flowers, depending on the individual. Male flowers have special triggers that literally flick away the pollinators they lure in the process of applying their pollinia. Darwin, himself, observed this spectacular process in C. saccatum, and was ridiculed by Thomas Huxley as a result due to the event's alleged preposterousness.

The Star of Bethlehem Orchid of Madagascar, Angraecum sesquipedale,

often called Darwin's orchid, has an 18-inch long nectar-spur emanating from its labellum. Knowing that sphinx moths (Sphingidae family) pollinate all of its relatives, Darwin predicted that there was a sphinx moth with an 18-inch long tongue that pollinates it. He wrote:[6][7]

[I]n Madagascar there must be moths with probosces capable of extension to a length of between ten and eleven inches [25.4–27.9 centimeters].

While a candidate moth, the Madagascan sphinx moth Xanthopan morganii, had been catalogued from the Congo region of Africa in the 1830s, the Congo is a bit far from Madagascar and Darwin had no knowledge of it.[6] In 1903, 20 after Darwin's death, a subspecies Xanthopan morganii praedicta (named praedicta in honor of Alfred Russel Wallace's prediction), which has an 20 centimeter-long tongue, was discovered,[8][7][6][9] though said subspecies was ultimately determined to be identical to the mainland species. Paradoxically, this particular sphinx moth has never been observed feeding on the orchid in the wild. In 1992, observations were made of the moth feeding on the flower and transferring pollen from plant to plant with both videos and stills. This was observed in the wild and confirmed further with studies in captivity.[6][7]

Male neotropical orchid bees (tribe Euglossini) collect specific aromatic chemicals (including methyl salicylate, eugenol, cineole, benzyl acetate, methyl benzoate, methyl cinnamate and skatole) from various orchid flowers in their special collection organs. The male bees derive no nutrition from these orchids, but instead use these collected scents to attract female orchid bees for mating.[notes 1] This collection of specific volatile chemicals is believed to be unique in the animal kingdom.[10] One species of orchid bee, Eufriesia purpurata, was observed to actively collect large amounts of DDT from treated house walls in Brazil without suffering ill-effect.[11]

On knowledge of this argument[edit]

Darwin's next book, published in 1862, was entitled On the Various Contrivances by Which British and Foreign Orchids Are Fertilised by Insects, and on the Good Effects of Intercrossing. This was a deliberate attack on the argument from design, and indeed on the notion of purpose in the world in general. Even the title was ironic, for Paley had said that there can be no contrivance without a contriver. Darwin managed to achieve two major goals. He showed how complex and remarkably effective adaptations could in fact be built up by small steps through natural selection. And he turned the argument from design on its head: Nature produces what we might call contraptions rather than contrivances. In other words, natural selection predicts both adaptation and maladaptation. The latter makes no sense as a deduction from the creative action of an omniscient and omnipotent being. Carried to its logical conclusion, the argument from design gives rise to the argument from incompetent design, hence to an argument for atheism.

The Harvard botanist Asa Gray was one of Darwin's ablest supporters, but the book on orchids was a bit much for Gray's religious sensibilities. He devised a theory that John Dewey later called design on the installment plan: God works by natural selection but includes a dose of providence by guiding variation along definite lines. Darwin replied that a deity who did that would have to foresee everything in evolutionary history, leading to a very heterodox theology.

All this ought to be common knowledge, but it is not. Special creation — the watchmaker's work — was decisively refuted over a century ago, and evolution soon became as well-established as the circulation of the blood. But people keep reinventing the same old arguments, sometimes with minor variations. Richard Dawkins is no exception. He never mentions Darwin's book on orchids.

Orchids ... A Witness to the Creator[edit]

Geoff Chapman published said article in Answers in Genesis' Journal of Creation in 1996.[13] It asserts that several aspects of certain Orchidaceae are evidence of irreducible complexity. It was wrong then and wronger now. 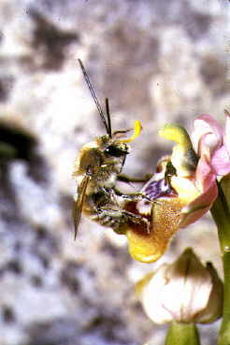 Eucera taurica on a Ophrys xtardans. The yellow stalk on the bee's head is a pollinium that the orchid attached.