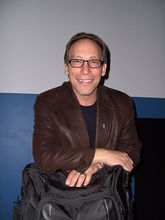 Smiling for the camera.

Lawrence M. Krauss is a Canadian-American theoretical physicist, cosmologist, purveyor of popular science, and being Foundation Professor in the School of Earth and Space Exploration and the Department of Physics in the College of Liberal Arts and Sciences at Arizona State University. Previously he was director of the Origins Project at Arizona State University, and was director of the Center for Education and Research in Cosmology and Astrophysics at Case Western Reserve University. He is fascinated with nothing and dedicates entire tomes to absolutely nothing at all.

Krauss believes the Universe sprang from nothing, in that nothing is in fact something because if there is the potential for something, via the laws of physics, then nothing can become something therefore you can't have nothing and the laws of physics will always ensure something. His lecture on the subject at the Atheist Alliance International conference in 2009[2] has been viewed over a million times on YouTube and led to a pop science book on the topic of the origins, and fate, of the Universe. His ideas have received criticism from physicist and philosopher David Albert for using an idiosyncratic definition of "nothing."[3] Unfortunately, Krauss's handling of this criticism wasn't very graceful: calling Albert 'moronic' and, allegedly, having his appearance at an upcoming debate cancelled.[4][5]

Similar criticisms have been leveled at his book on the subject by George Elis.

He is presenting untested speculative theories of how things came into existence out of a pre-existing complex of entities, including variational principles, quantum field theory, specific symmetry groups, a bubbling vacuum, all the components of the standard model of particle physics, and so on. He does not explain in what way these entities could have pre-existed the coming into being of the universe, why they should have existed at all, or why they should have had the form they did.[6]

Although Krauss is of the opinion that 'no real physicist' has objected to his ideas on the origins of the universe, both David Albert and George Elis are trained and respected physicists.[6]

Krauss is a defender of scientific skepticism and is fiercely critical of creationism.

On February 18, 2018, Buzzfeed published an article containing multiple allegations that Krauss had engaged in sexual misconduct, including grabbing a woman's breast without her consent at the 2016 Australian Skeptics' National Convention in Melbourne, and claimed that this was witnessed by multiple individuals present.[7] On March 6, 2018—two weeks after the Buzzfeed article was published—Krauss was placed on paid administrative leave by Arizona State University (ASU) and was barred from campus pending results of an investigation into his behaviour.[8] In July 2018, ASU determined that Krauss had violated the university's policy on "discrimination, harassment, and retaliation" by grabbing the woman's breast in the 2016 incident, and they announced that administrative action was being taken against him.[8][9] Krauss was replaced as director of ASU’s Origins Project and as of August 3, 2018 remained on administrative leave from the university.[8] He retired from ASU at the age of 65 in 2019 and does not appear to have been awarded emeritus status.[10][11]

He is the author of the books, The Physics of Star Trek (yes, Star Trek is real) and A Universe from Nothing.