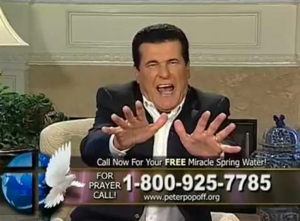 Billy Mays would not approve[citation NOT needed]

Peter Popoff is a notorious faith healer and televangelist Prophet. He was exposed in 1987 by James Randi who uncovered that he was being informed of believers' illnesses through a radio receiver in his ear broadcast to him by his staff based on conversations they had before the service. Popoff had led people to believe he was getting messages about their illnesses directly from God. The scandal drove him into bankruptcy. This hasn't stopped him from returning to the airwaves in the 21st century to fleece a new flock who may not be aware of the scandal.

Popoff's current modus operandi is to claim that giving him money will make God give you ten times as much money back, or even write off your debts. Popoff frequents late night infomercials where you can call in and order his special package that includes magic salt and water that you sprinkle over your check (made out to Peter Popoff) before sending it off, and a prayer cloth and anointing oil.[3] Reportedly Popoff has made over $23 million dollars with his current scam.[4] His shows continue to be shown on late night satellite channels in the UK, despite numerous complaints. YouTube vlogger dprjones has attempted to get Popoff off the air.[5]

Anyone who cares can tune into Popoff's television program on American cable channels Word Network (a Christian network) on Thursday afternoons or sometimes after hours or on BET (Black Entertainment Television, a network for African-American culture including rap/R&B music videos, reality shows, movies, reruns, and yes inane religious shows) on Sunday evenings and various times during mornings and overnight hours (as part of the network's "BET Inspiration" lineup). Popoff might be shown on the same channel as hip-hop music videos, but he sure ain't poppin'.

This Christianity-related article is a stub.
You can help RationalWiki by expanding it.
Retrieved from "https://rationalwiki.org/w/index.php?title=Peter_Popoff&oldid=2460654"
Categories:
Hidden categories: