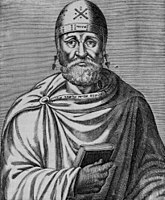 Failure to write about Jesus[edit]

In nearly every list of people who should have mentioned Jesus but didn't, the name of Philo-Judaeus (sometimes known as Philo of Alexandria) appears. Philo had strong connections both with the priesthood in Judea and with the Herodian dynasty,[1] so even if he himself didn't live in Jerusalem he had communication with those who did.

Carrier notes a gap in the historical chronology in the surviving writings of Philo. Philo produced a five-volume account (circa 40 CE) regarding his embassy to the Emperor Caligula and the events leading up to it. The volumes covered persecutions of the Jews, with each of four persecutors - Pontius Pilate (Prefect of Judaea from 26 to 36 CE), Sejanus[2] (died 31 CE), Flaccus[3] (Governor of Egypt 32 to 38 CE: Against Flaccus) and Caligula (Roman Emperor from 37 to 41 CE: Embassy to Gaius) - getting an entire volume, plus a conclusion. Of these only the Flaccus and Caligula volumes remain.[4] Interestingly, a letter that Herod Agrippa writes about the poor leadership of Pontius Pilate (in an effort to secure his grandfather's old kingdom for himself) which Philo quotes says nothing about Pilate trying to placate a Jewish mob by offering to free the killer of Roman citizens or that there were followers of a crucified seditionist in the area.

Moreover, in Flaccus IV (c39 CE) Philo writes about "a certain madman named Carabbas ...(that) spent all his days and nights naked in the roads, minding neither cold nor heat, the sport of idle children and wanton youths", who was driven from the public gymnasium so that some of his tormentors could dress and mock him as a king in a manner that eerily echoes Matthew 27:27-29. Yet no similarity to the Jesus story is noted.

Not that any of this stopped Christians from spinning nonsensical tales about Philo knowing about Jesus long after the fact. For example, Eusebius,[5] (died 339/340 CE) in his The History of the Church,[6] claimed:

"It is also recorded that under Claudius, Philo came to Rome to have conversations with Peter, then preaching to the people there ... It is plain enough that he not only knew but welcomed with whole-hearted approval the apostolic men of his day, who it seems were of Hebrew stock and therefore, in the Jewish manner, still retained most of their ancient customs." [7]

Moreover, according to Shirley Jackson Case's 1912 The History of Jesus, "Epiphanius makes two further statements which are sometimes thought to point to a pre-Christian Jesus. He says that there were Nazarees (or Nasarees) before Christ, and that Philo once wrote a treatise describing the early Christian community in Egypt."

"Philo of Alexandria Tells us:

There was a pre-Christian Jewish belief in a celestial being actually named "Jesus" who was...

So we are asked to believe that Philo not only met Peter himself but "wrote a treatise describing the early Christian community in Egypt" (identified by others as the Therapeutae) and yet wrote no word on Jesus himself all the while writing about a pre-Christian Jewish belief in a celestial being actually named "Jesus". And to top it off we are asked to believe that the Christian copiers did not take pains to preserve the main volume of Philo's work that would have covered the time of Jesus' ministry and formally documented their founder's life.

So the apologists have this Catch-22 of explaining why if (as they claim) Philo had no reason to know of Jesus, then 4th century Christians were saying not only did Philo write "a treatise describing the early Christian community in Egypt" but met Peter and "not only knew but welcomed with whole-hearted approval the apostolic men of his day" - while the one work that would have supported all this somehow went missing.