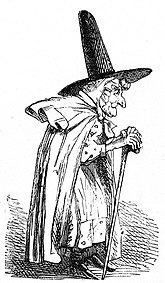 Look out! Look out! There's a witch about!

The European witch-hunts represent some of the most famous, largest, and most humanly devastating examples of the Christian witch-hunt phenomena. 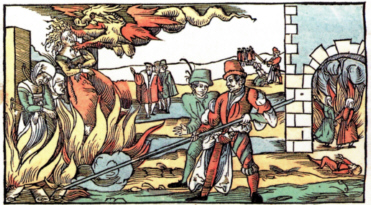 These witch-hunts occurred during the Renaissance and early modern period, between the 15th and 16th centuries, and peaking during the early 17th centuries — a period of time which corresponds almost directly with the Reformation (thus, contrary to popular imagination, they occurred not in the Middle Ages but in the historical periods that followed it). With religious schisms affecting many countries, as well as assorted territorial or dynastic wars, uncertainty and paranoia were rife within society, as was religious zealotry and hysteria. Both Catholic and Protestant (especially the Puritan varieties) theologies of this era emphasized the power of Satan and the threat he posed. The concept of the witch as not simply a local healer or sorceress, but a tool of the Devil, corrupted by demons, arose within this atmosphere, and the witch-hunters regularly cited the exhortation in Exodus 22:18, translated in the King James Bible as "Thou shalt not suffer a witch to live."

Between 40,000 and 60,000 "witches" were killed during the European witch-hunts, most of them innocent women, including "strange old widows," handicapped persons, simpletons, and mentally ill people. For those women who were skilled as midwives or other healers, this was often a sure reason execute them. However, while most of the victims were women, men weren't exempt from the witch trials either, as this was also was a convenient time for someone to "take care of" the neighboring priest, one's business rivals, someone that had "dirt" on a high official, or someone who just plain pissed them off by having them dragged before the court on charges of witchcraft. In much of Europe, a practice was followed of dividing the estate of the condemned witch between their accuser and any official involved, and so in many cases there was also a financial motive behind accusations of witchcraft.

A number of esoteric and bizarre beliefs and superstitions arose surrounding witches and their habits and abilities, varying from one country to another. In English witchcraft trials, a common feature was the concept of the "familiar," a demon appointed by Satan to aid witches in their mischief, which took the form of an animal. Naturally, any pet or livestock kept by an accused witch, or any animal discovered nearby, would be regarded as the witch's familiar. It was also commonly believed that witches themselves could transform into animals. Thus many witchcraft trials also involved accusations of being werewolves, since it was then portrayed as a voluntary transformation undergone by a witch or warlock in league with Satan, rather than an involuntary condition they had no control over, as modern films and literature would have it. 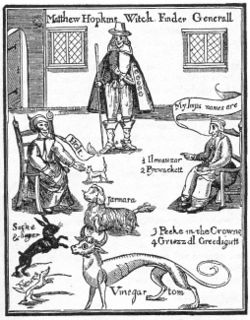 Matthew Hopkins, a self-styled "Witchfinder General," brought well over a hundred witches to trial in East Anglia during the English Civil War (1640s), virtually all of whom were hanged. He was portrayed by Vincent Price in a 1968 film with the same title. Also pictured are two witches and their familiars in the form of various animals, in a picture from his book The Discovery of Witches, a witch-hunters manual Hopkins wrote.

Acquittals were common in peaceful times and places, but during the more frenzied witch-hunts, a mere accusation of witchcraft was often enough to have that person killed. Upon the arrest of one "witch," they would be interrogated and expected to supply the names of other "witches" as it was generally supposed that all witches attended coven meetings (sometimes known as "sabbats"). As torture was commonly used in these interrogations, such names would usually be forthcoming and those accused would be arrested.

Under some countries' laws, there could only be one period of torture, but the period could be adjourned as often as necessary. In practice, this meant that the prohibition on multiple periods of torture was uniformly ignored. Where the accused was subjected to the lesser tortures in a witch-hunter's arsenal or where torture did not draw blood, a confession would often be recorded as "without torture" as these tortures were considered mild compared to what the witch-hunters could have inflicted. Such "mild" tortures were also often referred to as "relaxing" the accused. Even in countries which had formally abolished torture, such as England after 1628, exceptions such as sleep deprivation and forced continuous walking around a cell were made for witches, as it was believed that physical exhaustion would cause the witch to call her familiar.

Although witches were usually tried before execution, the trial would not always follow any accepted practice of law, as witchcraft was viewed as a "crimen exceptum", one so atrocious the state suspended the ordinary legal process (itself not always much protection) . While a counsel for the defense was allowed, he stood the risk of being accused himself if he defended the accused "unduly". Hearsay evidence was permissible, evidence did not have to be disclosed, nor did the identity of the accuser. Indeed, the Malleus Maleficarum ("The Hammer of Witches", a treatise written by a Catholic Inquisitor in 1486 and condemned by the Catholic church 3 years later, not that this stopped secular courts from using it anyway) advises that, if the accused asks who has accused her, she should be told that "she knows very well whom she has bewitched". Officials were allowed and encouraged to lie to the accused (such as promising mercy when none would be forthcoming). The Malleus Maleficarum, like most such texts, assumes that the fact of accusation is, in itself, proof of guilt.

Trials by ordeal were also common, and often fatal, the most famous example being to throw the accused, whose hands and legs were tied with ropes, into a river. If the accused stayed underwater, they would be considered innocent and pulled up (however, this often did not occur in time, as they waited to make sure the accused was not coming up, and thus many drowned). If she managed to float, this would be seen as a sign of supernatural powers, and she would be considered guilty of witchcraft. Additionally "It became well known that, if the poor victim was laid out 'flat on their back and [holding] up their feet with a string' then 'the forepart will not sink'"[2] i.e., those conducting the ordeal could "prove" the accused guilty just by positioning them this way.

Physical deformities or anomalies were often considered to be occult and played a part in witch trials. In English folklore, witches were believed to have a "third teat", used for suckling their familiar, which could be located anywhere on their bodies. In reality, this meant that any mole, growth, birthmark, wart, or even a swollen clitoris might be regarded as the witch's third teat and hence a sign of guilt (not to mention actual supernumerary nipples, which are surprisingly common at an estimated occurrence in 1 out of 18 people).

In the Catholic nations of Europe, where laws were heavily influenced by ecclesiastical doctrine, witches were usually burnt to death, a method of execution otherwise used only for heretics, since the flames were believed to have a purifying and exorcistic effect on the corrupted soul. In some Protestant nations with a greater reliance on common law, especially England, hanging was the usual punishment. The witches convicted at the Puritan English colony of Salem in Massachusetts during 1692-3, which were among the last witch trials of this era, were also hanged.

See the Wikipedia article on Feminist interpretations of the Early Modern witch trials.

Unfortunately, this admittedly awful time has been stretched and mangled into the central narrative for a particular pseudohistory promoted by many neopagan "writers" as well as some feminists influenced by goddess pseudoscholarship. In particular, they tend to inflate the number killed during the "burning times" (some claiming that up to 9 million died[note 1]), and also like to claim that all of those killed were in fact followers of the "Old Religion," often depicted as a prehistoric matriarchal religion that the nasty patriarchal Christians were trying to destroy (an idea begun by Margaret Murray). They also tend to place the European witch hunts in the Middle Ages, sometimes up to a thousand years earlier than when they actually took off during the Renaissance. This claim has been debunked many times over again, and yet it continues to pop up every so often.

Another misleading claim is that the witch hunts were a "women's holocaust." While the hunts were driven in large part by sexism, one estimate places men as the victims in about 15% of cases.[3] Accusations of witchcraft based on gender varied by location, with witch-hunts in western Europe largely targeting women and those on the European periphery also commonly targeting men (Scandinavia[4]:39 and Russia[5] being prime examples).

Witch-hunts are a phenomenon that can happen in almost any culture. They can be used to explain why bad things happen to good people[note 2] and, more importantly, "Who can we blame?"

In many cases, even on a local scale, a "witch-hunt" becomes a frenzy of people naming victims, evidence without merit, trials without evidence, convictions without trials, and executions without convictions.