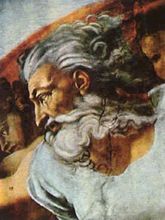 God is recorded in the Bible as having personally killed a large number of people.[note 1] While the majority of the divine assassinations certainly took place during God's time as the notoriously vengeful deity in the Old Testament, a few instances are also recorded in the (just slightly) more peaceful New Testament.

This page lists people personally assassinated by His hand or by His non-human minions; however, it is not entirely complete. It also does not include the vastly greater number of people which the Bible maintains were killed at His instruction, or in His name throughout recorded history, though those count towards his tally.

The God of the Old Testament had a very simple approach to education and law. In Genesis 9:1, God asked that Noah and his kin be "be fruitful and increase in number and fill the earth." Frenzied reproduction was certainly a good idea when trying to avoid extinction at the hands of an angry God, who saw death as a suitable chastisement for even the most trivial of offences.

Since large numbers of people often end up as meaningless statistics, consider the rough guide below:

Of course, many of these numbers do pale next to what humans do to each other, and what the planet itself has thrown at us, but it is really the motives (or lack of) that should be truly shocking. When one takes into consideration all killing committed for God and in his name (up until the present 2021), the tally increase would be much, much higher. He gives free will, but apparently, it is just a trap.

God of the New Testament appears to have had a rather drastic change in personality, resulting in far fewer deity-induced deaths than seen in the Old Testament. On the other hand, the New Testament is a smaller anthology covering a much shorter time period, and makes up for it with Revelation.

See the main article on this topic: Mysterious ways

Despite the obvious dickery above, it's quite easy for the usual theological excuse to be trotted out to explain it: God works in mysterious ways.

How many people will die at the Battle of Armageddon?[edit]

We can then calculate the volume of blood using the formula: V = πr2h. Using biblical value of π = 3 we get the formula:

If we divide this number by the average amount of blood in a human body, 5.5 litres:

So we find that according to scripture, at a bare minimum according to one interpretation, God will kill approximately 20,945,454,545,500 people. That's in the trillions.

However, since it says flows and not pools, it wouldn't be unreasonable to think that a river was formed. Assuming they measured the blood-flow using actual horses, and a horse is 1 metre across.

So, in another interpretation, God will kill a minimum of 87,272,727 people to produce a horse bridle-high blood-flow.