From RationalWiki
Jump to navigation Jump to search
Were you looking for Phylogeny (relationships between groups of animals according to their evolutionary heritage)? 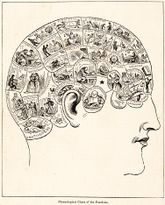 Phrenology is the idea that it is possible to establish facts about a person's psychology or morality, such as criminal tendencies, by measuring the size and shape of their head and feeling for any bumps.

The concept emerged at the end of the 18th century, and became incredibly popular in Europe and America throughout the 19th century, although it was widely discredited by the early 20th century.

Among the accomplishments attributed to phrenologists is the postmortem theft of composer Joseph Haydn's head.[1]

Phrenology was based on a theory that specific parts of the brain control certain things (which is true), but rather than mapping brain activity as things like nerve responses, muscle control or memory, phrenological diagrams show parts of the brain governing character traits such as "acquisitiveness", "benevolence", "passion" and "mirth".

Although now dismissed as a pseudoscience, phrenology was important historically in that it recognised the importance of the brain in thought and behaviour, a concept which had been proposed before but had largely been neglected. However, phrenology's findings were based on misconceptions, speculation and anecdotal evidence, placing it in pseudoscience territory. It can be seen as a transitional discipline before the more empirical sciences of neuroscience and psychology studied the brain and the mind more accurately.[2]

Despite being denounced by the mainstream scientific community, phrenological ideas have been used sometimes during the 20th century, particularly by some racial theories, which (wrongly) argue that differences in some races' skull sizes and shapes indicate low morality and intelligence.

Despite its scientific pretenses, the idea of phrenology is remarkably similar to palmistry, a concept more associated with mysticism.

The 1949 Bugs Bunny cartoon Bowery Bugs poked fun at this practice when Bugs (disguised as a mystic) talks about reading the bumps on his client's head. When his client replies he doesn't have any bumps on his head Bugs hits him there with a hammer.[3]

This practice was also demonized in the 2012 movie Django Unchained,

where Calvin Candi (a slave owner regarded as a cruel bigot even for the standards of pre-Civil War America) uses it as an excuse for his racist views.