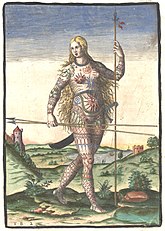 The Picts were the ancient inhabitants of northern and eastern Scotland from very roughly 500 BCE to c. 1100 CE. Little is known about them, since they left no written record and even their neighbours didn't say much. It's not clear how cohesive they were as a group: they had no central ruler or authority until very late in their history. Mostly what remains are stones with enigmatic carvings, and some archaeology. However like the Celts there is a certain amount of lies and woo about them, coming from Scottish nationalists, Celtic enthusiasts, and various racists. Inevitably they also crop up in Arthurian legend. Mel Gibson was not a Pict.

Romans came to Scotland between 50 and 200 CE; Irish did likewise from the late 6th century. While Brittonic peoples lived in southwest Scotland and later the Northumbrians came up to the Forth in the East, Picts lived in the rest. It's not clear where they came from or when, and genetic studies have failed to offer anything conclusive.

The word "Pict" probably comes from the Latin exonym "picti", and suggests they may have had tattoos or painted their bodies, although there's little hard evidence for this (Braveheart notwithstanding). It's not clear what they called themselves.

The Picts were probably a typical Iron Age people, who lived in small communities, farmed, fished, and may have traded a little with mainland Europe. They also built brochs

, round stone buildings of unknown purpose. From surviving place and personal names, they most likely spoke a P-Celtic language, although its exact relationship to other Celtic languages is unclear.

They were converted to Christianity in the 8th and 9th century and started carving crosses rather than snakes. Their kingdom was known as Alba from about 900. Around that time, Scotland came under control of the Scots, who were Irish Gaels, and the Picts began to speak Gaelic and lost their cultural identity. Vikings didn't help either, but regardless by about 1100, Picts as a distinct culture were no more.

Pictish woo seems to have started with the Romans, who claimed to have beaten a mighty army at Mons Graupius in northeast Scotland in around 83 CE. There is some skepticism as to whether they exaggerated their success or if the battle took place at all.[1]

The Romans were first to mention the Picts, and nobody really knows what they were doing before then. Various fanciful ideas of the origins of Picts have been posed. These divide into theories that claim they came from exotic faraway places and that they are the most ancient inhabitants of Scotland or Britain.

They have been linked to the Basques as pre-Indo-European inhabitants of Europe.[2] If they were here first, that makes them extra special. Or something.

In the 18th century they were believed to have been Goths, linked to the industrious Teutonic peoples of northern Europe; this was used in the 19th century to justify racist beliefs about the superiority of the Germanic inhabitants of Scotland and England over southern European races.[3] Another popular theory had them coming from Norway or wider Scandinavia.[4]

Contrarily, other theories say they might even be from Asia Minor, descended from Chaldees or Galats via the Gauls.[2] Or as the alleged links with Basques suggest, from Spain.[5] Although there were Celts in both Spain and Scotland, the rest really doesn't follow.

While they may have spoken Celtic, it's unclear how closely they were related to other Celtic peoples, which includes the pre-Roman inhabitants of England and Wales, and the Irish. It's not clear how cohesive the Celtic peoples were: if they just happened to speak the same language (like British, modern First Nationers, middle-class Nigerians, and many Indians do today) or were a single ethnic group. With Celtic revivalism having been popular in Scotland since the 18th century, people like to claim everyone is Celtic; although the few people who don't like Celts may take a contrary view on the Picts.

Because nobody knows when they got here, even though the Picts aren't mentioned by anyone until the Romans came, some people suggest they built anything in Scotland for thousands of years before, such as megalithic Orkney.[4] This enhances their status as Scotland's original and true inhabitants.

There are various fanciful claims that the Picts were the ancestors of the Welsh or the British, based on the fact that they possibly spoke a Brittonic (Brythonic) language related to Welsh and the language of the ancient Britons. Supposedly a small amount of Pictish DNA in a minority of Welsh men indicates their descent from Caledonian nobles who fled south.[6]

Inevitably they crop up in Arthurian myth: as the villains, with treacherous Mordred's mother married to a Pictish king. Some legends say that Arthur was based on Arturius, a warrior from Dalriada, a Brittonic kingdom in the west of Scotland, who may have died fighting the Picts.[7] Historian Hugh McArthur suggests Guinevere was a Pict.[8]

Mel Gibson in Braveheart depicted the Scots as painting their faces blue. This is probably borrowed from accounts of the Picts. Even if you believe the Picts painted themselves, it's entirely anachronistic for William Wallace's time.

is a Scottish Pictish activist who campaigns for Pict-awareness and doesn't like the English much. He founded a Pictish micronation in Skye and was on the successful side in the campaign to abolish tolls on the Skye Bridge. More recently he has been campaigning against speed cameras. Whether the ancient Picts were fond of running red lights is unknown.[9]

Brochs are quite intriguing: tall stone buildings with double walls and no windows. They seem impractical as houses, but could have been fortifications or stately homes or watchtowers or prestige buildings with no obvious purpose.[10][11] Other more eccentric theories suggest they were used as places of worship, where the low doors would enforce pious bowing rather than being a design flaw, or as a chain of signal beacons.[12] Feel free to make up your own theory based on prejudices about Pictish life unbolstered by any archaeological evidence.