This photograph was taken more than six decades after WWI.

The Iran-Iraq War was a horrific conflict between those two nations which took place between 1980 and 1988. It was a devastating conflict in which both sides employed tactics highly reminiscent of the trench-warfare of World War One because that worked out great the first time around. The war is estimated to have killed roughly half-a-million people,[1] a huge death toll which shouldn't be too surprising, all things considered.

Conflict broke out due to hostile relations between Ba'athist Iraq and the recently empowered Islamist government in Iran. Saddam Hussein, Iraq's leader at the time, feared that the revolutionary Iranian government led by Ayatollah Khomeini would encourage a religious revolt among Iraq's oppressed Shiite majority.[2] Hussein also hoped to take advantage of Iran's post-revolutionary chaos to annex a few oil-rich provinces near his eastern border because of course he would want that.[3]

Unfortunately for Iraq, their offensive ground to a halt in less than two years against the surprisingly resilient Iranians, and they were forced onto the defensive until the war's end.[4] Notably, both the United States and the Soviet Union offered support to Iraq during the conflict, as both nations had a sour view of the ayatollahs. Meanwhile, Kurdish militias in northern Iraq, a long oppressed ethnic minority, sided with Iran. This would have really bad consequences for them in the following decades.

The war ended with a white peace, meaning there were no border changes or reparations. However, the financial ruination it caused for Iraq led Saddam to invade Kuwait to steal oil and avoid debts, sparking a series of events which would lead to his downfall.

Thar be oil in the marked provinces! Arr!

Relations between Iraq and Iran had been hostile for decades, especially under the rule of the US-backed Shah Pahlavi. After the Shah was deposed during the Iranian Revolution, Hussein initially welcomed this event as the downfall of a longtime enemy.[5] However, these good feelings were not returned by Khomeini. The Ayatollah was eager to spread his revolution beyond Iran's borders. To this end he encouraged Iraq's Shiite minority to launch a revolt against Saddam's rule, and he frequently instigated violent border clashes between the two nations.[6] Iran's calls for a Shiite revolution was not ignored either, as Hussein's secular Ba'athist government heavily discriminated against religious minorities.[5]

Meanwhile, Hussein also had ambitions of raising Iraq into superpower status, and he now hoped to do this by annexing Iran's oil-rich region of Khuzestan, which was directly across the border.[7] His goal was to replace Egypt as the most powerful Arab nation and achieve hegemony over the Persian Gulf.[8]

In early 1980, Iran withdrew its ambassador from Iraq and demanded reciprocal action.[5] As war became more and more likely, Hussein's government forcibly deported thousands of Iraqi Shias under the pretext that they were connected to Iran's government.[9]

Iraq launched a full ground invasion in late 1980, supported by an air offensive which failed to do significant damage to Iran's air forces.[10] The attack encountered problems immediately due to the poor training and morale of the Iraqi divisions as well as the hoped-for support from Iran's Arab minority failing to materialize.[11] Meanwhile, Iran's air force, consisting of potent American-built fighters like the F-14 (acquired prior to the Shah being deposed), was able to do significant damage to the Iraqi advance, most importantly by disabling and damaging armored vehicles.[12]

Iran's ground forces were unable to directly face Iraq's artillery and armored superiority and thus retreated into the cities to fight defensively.[13] Within the cities, the Iranians used Molotov cocktails and RPGs to harass the Iraqi tanks and used the terrain against the attackers.[13]

The Iraqi attack solidified popular support for the then-weak Iranian regime, and a new wave of 200,000 zealous volunteers allowed the mullahs to replenish the ranks of their armies.[14] With all of these factors working against them, the Iraqi advance ground to a halt.

At this point, due to both sides going into a defensive standpoint to rebuild their strength, the war settled into World War One-esque trench warfare, and battles primarily consisted of artillery attacks and covert raids.[15][16] After some time, however, the Iranians began using human wave attacks, where their zealous soldiers would rush the Iraqi lines and attempt to overwhelm them without concern for their own losses.[13] This tactic were effective against the superior Iraqi forces, especially because the Iranians would muster their forces using buses and cars in a way that went unnoticed by the Iraqi generals.[17]

This human-wave tactic reached a new height of brutality when Iran's government began conscripting children 15 and younger to rush the Iraqi trenches.[18] These boys were also used as minesweepers.[19] Other boys were sent into battle against Iraqi tanks and were bound together with ropes to prevent desertion.[20] According to Iran's military itself, approximately 33,000 high school-age boys were killed during the war.[21]

By mid-1982, Iran's human-wave tactics and the complacence of Iraq's generals allowed the mullahs' armies to go on the offensive with a series of successful attacks on the Iraqi lines.[22] Realizing that he was in over his head, Saddam Hussein announced in June that he wanted to withdraw from Iran and fight Israel instead, essentially offering a ceasefire to Khomeini.[23] As a gesture of goodwill, Hussein began unilaterally pulling his forces out of Iran; however the Ayatollah refused to end the war unless Iraq paid reparations and replaced the Ba'athist government with a Shiite Islamic theocracy.[24] So while Hussein started the war, Khomeini prolonged it.

In response to this, Iraq's Health Minister suggested during a cabinet meeting that Hussein could temporarily step down to placate the Iranians; an angered Hussein escorted the man into the next room and personally executed him with a pistol before returning to the meeting.[25]

With Hussein still futilely hoping for a way out of the war, Iran went on the offensive, seeking to invade Iraq and achieve all of its wargoals. However, the Iraqi military's resolve strengthened once it was defending its own soil, and the war once again settled into trench combat and pointless human wave attacks.[26] In response to this, the Iranians changed their tactics to focus on wearing Iraq down through attrition; they launched near-constant smaller-scale assaults designed to slowly wear down Iraq's military and manpower and drive the nation into economic destitution by forcing them to drastically increase military spending.[13] On the northern front, Iran also began arming and training Kurdish militias to attack Iraq's oil industry[13] — ironic because Iran has had its own Kurdish separatist movement since 1918.[27] In 1984, Hussein ordered the use of chemical weapons on the front lines, although his government would repeatedly deny the allegations before the United Nations.[28]

See the main article on this topic: War crimes

Unable to defeat each other on the ground, both sides began using strategic bombing to destroy civilian and industrial targets in each other's cities.[29] In order to deprive each other of trade profits, both sides also began attacking shipping in the Persian Gulf, especially oil tankers. This latter policy served to fully internationalize the war, for obvious reasons.[29]

Naturally for a war in the Middle East, this little scuffle between Iran and Iraq drew significant attention from nations around the world, especially once they began interfering with the world's precious oil supply.

Syria, at the time a rival to Hussein's Iraq, shut down the vital Kirkuk-Baniyas pipeline in mid-1982 just to fuck with Hussein's finances in the middle of the war.[30] This forced Iraq to conduct most of its oil exports through a smaller pipeline in Turkey.

That's actually about the only support Iran received for the duration of the war. The United Nations Security Council delivered a half-assed "Stop it, guys" resolution, but Iran was forced to fight in complete isolation while purchasing ludicrously expensive black-market weaponry in order to avoid arms embargoes.[31] 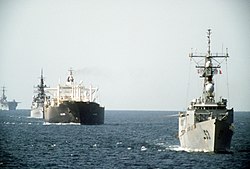 The US Navy escorts oil tankers through the Persian Gulf, 1987.

While Iraq was experiencing financial troubles due to Syria's above-explained oil fuckery, Sunni-ruled Saudi Arabia and the Persian Gulf State crew began subsidizing Hussein's war to the tune of $60 billion per year, as they hated and feared Iran's radical regime far more than the occasionally hostile Saddam Hussein.[32]

Iraq at this time also benefited from discreet support from the United States and Europe, which manifested as satellite intelligence and weaponry.[33] While the West had originally been neutral, this policy changed after Iran got back onto its feet and began pushing Iraq's forces out of their country. Western governments, especially the CIA and the United States were fully aware that Hussein was using chemical weapons including nerve gas, but still provided the locations of Iranian logistics and military targets knowing they would be gassed.[34] Indeed, the Reagan administration's policy had sharply turned to ensuring an Iraqi victory at all costs, and this included ordering the Commerce Department to provide licenses to US companies to export raw materials to Iraq which could be used to construct yet more chemical weapons — [35] ironic because the Reagan administration had secretly and illegally sold weapons to Iran, as was revealed in the Iran-Contra scandal. Because it's not like that could ever backfire in any way whatsoever.

Victims of an Iraqi chemical attack in 1987.

The US also responded to the "Tanker War" by launching Operations Earnest Will and Prime Chance, in which the US Navy would escort Iraqi and friendly merchant shipping in order to protect it from Iranian attacks.[36][37] This resulted in an embarrassing incident when a US ship mistook an Iranian passenger airliner for a fighter and shot it down, killing 290 civilians.[38]

Meanwhile, in a rare agreement with the West, the Soviet Union also provided arms to the Iraqis for similar reasons as the Americans, this flow of arms dramatically increased after Iran began cracking down on communists and expelling Soviet diplomats.[39]

End of the war[edit]

By 1987, Iran's economy was suffering, and its public had become thoroughly sick of the war, even resulting in a wave of anti-war protests.[40] Meanwhile, the military situation for Iran had deteriorated, as their armies were falling back on almost every front, and the US had successfully achieved naval superiority in the Persian Gulf on behalf of Iraq.[41] The naval war between the US and Iran had dramatically escalated after the US attacked Iranian oil platforms and several Iranian ships in retaliation for having vessels damaged by Iranian mines.[42][43]

With the war essentially lost on every front, Iran finally accepted a UN-mediated ceasefire after Hussein threatened (and began to) to launch air strikes with chemical weapons on Iranian cities with no international outcry.[44]

Funeral for an unknown soldier in Iran.

Despite the actual peace agreement resulting in no border changes or reparations, Iran can be said to have emerged from the conflict in a much better position than Iraq. Rather than leading to a collapse of the nation, the war actually helped strengthen Iran's fledgling Islamic Republic. Even cultural, ethnic, and religious minorities rallied behind the government to protect it from Hussein's attack.[45] The onset of the war also forced Iran's government to halt is ongoing military purges and enlist thousands of volunteers to fill out their ranks.[46] The actual conduct of the war then forced Iran to reform its ragtag military into a modern and tactically competent fighting force,[13] and lead Iran's Revolutionary Guard Corps to become the powerful and zealous organization it is today.[47] The war was successfully used by the ruling mullahs of Iran to radicalize an entire generation of their nation's people.[48]

Saddam Hussein, meanwhile, had used brutal tactics against his nation's Kurdish minority in retaliation for their collaboration with Iran, which earned him their permanent enmity.[49] Meanwhile, Iraq's shattered finances and its use of chemical weapons would eventually set off a chain of events which would lead to the country's ruination at the hands of the United States.