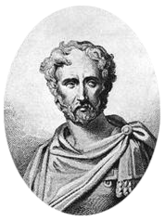 Pliny the Elder (23/24–79 CE) was a Roman writer whose Natural History (c. 77-79 CE) was an important source for natural history and other sciences in the classical period and beyond, covering zoology, botany, medicine, geology, geography, farming, and many other disciplines. Pliny applied a skeptical eye to many topics, trying to distinguish knowledge from superstition[1], and he was usually good about describing his sources. He was also dismissive of most forms of magic.

Although the Natural History was an enormous achievement, some sections were not entirely accurate, and contained a wide range of fantastical, mythical, and cryptozoological beasts, as well as some other topics which have recurred in pseudoscience, pseudohistory, and pseudogeography ever since - generally reproduced credulously without any of Pliny's skepticism[1].

Pliny lived in the early days of the Roman Empire. In a tragic example of a scientist encountering an unusual scientific phenomenon, he was killed while investigating the eruption of Mount Vesuvius which also buried the Roman cities of Pompeii and Herculaneum under ash and mud respectively.[2] His nephew Pliny the Younger was also a well-known writer. Natural History is Pliny the Elder's only surviving work.

The subject matter of the Natural History (Naturalis Historia) is far beyond what is now understood by the term. Pliny seems to have attempted to record pretty much everything about life and all of human knowledge. It begins with a lengthy geographical description of the world, before books covering land animals, fish, and plants; later there is a lot of material on medicine before briefer discussions of metals, art, and stones.

It records some good information, including descriptions of the elephant and hippopotamus and several other African animals; of oysters and their relation to pearls; and of beekeeping. It also has a lot about other crucial Roman activities like the cultivation of grapes and olives and the happy use to which grapes can be put. The book on trees covers such topics as papyrus and furniture-making. There are also many chapters on plant remedies. Occasionally, as with tragacanthe or goat's thorn (used in textile and leather manufacture and as a remedy for diarrhoeia), he'll even tell you the current price, 3 denarii per lb (XIII.36). He also shows a disregard for modern scientific principles in the way he mixes serious inquiry with chitchat and gossip.[1] But on some topics, such as dreaming, he is happy to state both sides and remain unconvinced by either. (X.98)

Geographically, there is a description of the forms of shadows and lengths of the day at what we would understand to be different latitudes from the tropics to the far north. He discusses up-to-date topics such as the recently discovered island of Britannia (Britain) and Hibernia (Ireland), for which he draws on sources including Pytheas, Isidorus, and Agrippa; he gives Britain's dimensions reasonably accurately at 800 by 300 miles. Some of his other geography is less easy to comprehend.

Natural History was first translated into English by Philemon Holland in 1601.

Astrology and other forms of magic[edit]

An artist's conception of the basilisk from the 1550s

Even when writing about real animals there is a certain amount of the incredible. His discussion of elephants is disturbingly vague when it remarks on how "they are supposed to have a notion, too, of the differences of religion"; he also claims they refuse to board a ship until their owner promises to bring them home again. (VIII.1)

He also describes a good deal of material which is either vague or untrue.