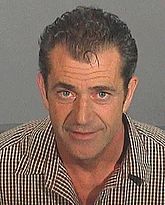 Mel, giving you the creepy stare

Mel Gibson (1956–) is an American actor and filmmaker who spent his formative year and began his acting career in Australia.[1] When he's not starring in beloved film franchises and winning more awards than you can shake a fist at, he is at various times an alcoholic anti-Semite and racist, a homophobe, an abusive boyfriend, and, along with his father, the founder of his own little bizarre sedevacantist Catholic sect.[2][3] He directed and produced the 2004 film The Passion of the Christ, which is conveniently a very neat and tidy cross-section of his life, career, and beliefs.

Prior to going more than a little off the rails, he did have a sterling film career, having starring roles in the Mad Max and Lethal Weapon series, and the Academy Award-winning (but stunningly inaccurate) Braveheart, with the pinnacle of his career being in 2000 when he voiced Rocky the Flying Rooster in Nick Park's animated epic, Chicken Run. (Oh how the mighty have fallen!)

From the 1990s he also carved out a career as director and/or star of a series of historical epics that often took a hilariously pseudohistorical approach to important topics such as Scottish independence (Braveheart, 1995), the American Revolution (Roland Emmerich's The Patriot, 2000), the Vietnam War (Randall Wallace's We Were Soldiers, 2002), pre-Colombian civilization (Apocalypto, 2006), pacifism in World War Two (Hacksaw Ridge, 2016), as well as Jesus.[4][5][6][7][8]

In the early 2010s, Mel was "cancelled" for, among other reasons, calling the Jewish actress Winona Ryder an "oven dodger".[9]

During an interview with the Spanish newspaper El País in 1991, Gibson stated he quit the mainstream Catholic Church because it had become "too liberal." When asked about homosexuals, he responded, in a most eloquent fashion, by stating that "[homosexual individuals] take it up the ass." He then laughed, got up, bent over, pointed to his butt, and continued, "This is only for taking a shit."[10]

As Scottish comedian Frankie Boyle said of Gibson: "When they were making Braveheart, everyone said, 'Oh it's ridiculous, Mel Gibson playing a Scottish guy, that's not gonna be very convincing.' And look at him now: an alcoholic racist."[11]

He is the sole contributor to the church and has threatened to cut funding to it if its 70-odd[12] members don't stop talking about his decision to leave his wife for his mistress.[13]

On 28 July 2006, Gibson was arrested for a DUI while speeding in his vehicle with an open container. Gibson first told the arresting officer, "My life is over. I'm fucked. Robyn's going to leave me." According to the arrest report, Gibson then added "Fucking Jews... the Jews are responsible for all the wars in the world."

Since then he has proven himself an all-round asshole in many ways. He left threatening phone calls for his girlfriend Oksana Grigorieva and was sentenced to 3 years' probation after hitting her.[14] His stepmother filed a restraining order against him in 2012.[15]

On a bright side, however, he's a big philanthropist. Despite his recalcitrant anti-semitism, Gibson has secretly donated money to Holocaust survivors.[17][18] In 2004, he also donated 10 million dollars to the The Mattel Children's Hospital at UCLA and to the Jewish Cedars-Sinai Medical Center in Los Angeles[19] and in the previous year he helped to pay for the restoration of Renaissance artwork.[20] Despite, or maybe because, of his alcoholism, Mel Gibson also supports the non-profit charitable organization Angels at Risk, focuses on the issue of drug and alcohol use and abuse in kids and teens.[21]

Mel is also known for his environmental advocacy and has raised funds to save the rainforest and ancient Mayan ruins in Central America.[22]