RationalWiki:Guide to the Hidden Forum (or there is no cabal) 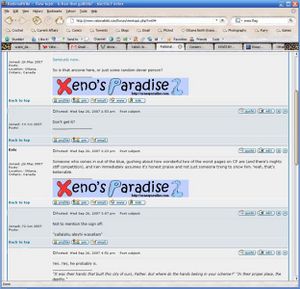 A random sample of the shocking discussions that go on in secret..ooooh!!! (this discussion was about the sockpuppet "pearson", proving that some socks are created without everybody knowing)

The Hidden Forum was an uber-top secret forum hidden from public view that was used in the past by some members to reveal the identity of socks on Conservapedia and to coordinate occasional actions. It was also a place to discuss certain high-profile interactions between conservapedians who edited this site when having those discussions in public would harm those individuals.

RationalWiki started its existence shortly after a rash of banning of evil liberal editors on Conservapedia. Several of these users contacted each other via e-mail in order to maintain a loose knit group, because frankly they had way too much in common to let them just be ships passing by on the tumultuous sea that is conservapedia. They had never really had off-wiki contact but were accused of being a "cabal" so they decided to embrace the label. RationalWiki.com was set-up as a private wiki to bitch about conservapedia and its sysops, also to just hang out with friends.

This site was discovered after a month or so by conservapedia sysops and it was decided it was time to take things in a new direction. That was the creation of the current site or what we like to call RW 2.0. Several of the original members of RW wanted to continue covert actions against CP. A forum was set up that was hidden from public view to allow these editors to better organize their attempts at gaining positions of authority at CP or other actions. The original members of the "cabal" were given access to this forum. Since it originated, one non-original "Cabal" member who was met on the blogs was added as well.

The forum's relationship to RationalWiki[edit]

This forum was completely unrelated to RationalWiki and no decisions involving the wiki were made in it. No discussion of users outside of their potential involvement with Conservapedia was discussed on the forum. Several things were said on the forum under the pretext that it would not be generally viewable (particularly to Conservapedia sysops) and so the forum remained hidden. From time to time some issue that involved this "secret" forum emerged on the site so here is this explanation as to what went on. The forum received relatively little traffic and was not an integral part of the site or the site goals.

Example issues discussed and debated in the forum[edit]

The forum membership was made up of original cabal members as sort of a throwback and memoriam of RationalWiki v1.0. Since most of the information is meaningless to the wiki but could be harmful to several individuals (both active RW editors and active members of CP) its membership has not been expanded. Anyone who wishes to fess up to being a member should sign here:

Feel free to ask any of these members about the forum or its contents, but don't expect an answer from most of them, as most of them have long since gotten a life and left the site.