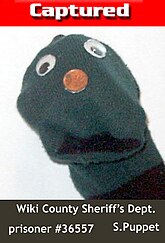 Sockpuppets are often against the Terms of Service of a website. Breaking a site's Terms of Service isn't illegal in and of itself in the USA, as the 9th Circuit Federal Court of Appeals ruled.[1] However, if the sockpuppet residing in the US (or country with similar laws) deliberately tries to evade a site IP block, and the site's ToS doesn't explicitly allow such thing, the sockpuppet is probably criminally violating the Computer Fraud and Abuse Act.

The US military apparently created sock puppet accounts and proxy adresses so they can influence online social networking in pro-American directions.[5]

The term comes from the classic children's toy, which is a sentient organism bearing a suspicious resemblance to a sock over somebody's hand. Any suggestion that it is being controlled by the person who owns the hand (or sock) is mischievous trouble-making. Sock puppets are popular with educationalists such as Shari Lewis

The Jargon File defined it in the modern sense in 1999:

(USENET: from the act of placing a sock over your hand and talking to it and pretending it's talking back.) In Usenet parlance, a pseudo through which the puppeteer posts follow-ups to their own original message to give the appearance that a number of people support the views held in the original message.[7]

The first use of the term in the mainstream media is recorded by the Oxford English Dictionary from March 2000 in US News and World Report: "Jennifer Brand, a 24-year-old student who backed President Clinton in 1996, called Gore ‘a sock puppet’ and Bush ‘a wimp’."[8][9]

A sock puppet is also sometimes called a "meat puppet", which is considerably ickier (most people would rather put their hand inside a sock than a lump of meat).[8]