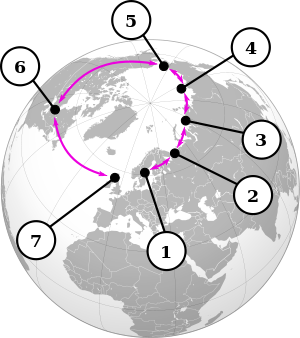 The standard example of ring species is the circumpolar species "ring" of gulls of genus Larus. The range of these gulls forms a ring around the North Pole; there are seven populations and each population can breed with the previous and next, but the first and last cannot interbreed. This example is actually far more complicated, as again is typical in the real world - there are several other taxonomically unclear examples which belong in the same superspecies complex, such as L. michahellis, L. hyperboreus and L. cachinnans.

Another popular example is a salamander common to and widespread across the North American west. Ensanita Salamanders have exhibited ring species traits.[4] Around the Cental Valley in California, it has been observed that several salamanders exhibit identical traits that imply a common speciation, while also exhibiting clear differences in reproductive traits. The nearly identical taxonomy/habitat of these salamanders suggests the success of the species is equally viable from any side of the valley to the other. The idea is that the salamander at the north end of the valley was fit for the region, so much so that the salamanders' offspring were forced to travel farther south to compete, along both east and west sides of a valley. As the salamander population spread farther south, mutations and variations naturally occurred, but were driven mostly by reproduction.[5] Each salamander could interbreed with its closest relatives, but when the off-shoots of the species met again on the southern side of the valley, interbreeding could not occur. As each southern variation has a northern ancestor variation with which it can still interbreed, but not an eastern or western counterpart, this implies a common local northern ancestor.[6]

With respect to design[edit]

Ring species constitute strong evidence that evolution does indeed happen, at least such a thing would be predicted by evolution and is extremely strongly supportive of the theory. If a designer or God made all the species as they are, any two members of the same species of opposite genders should be able to reproduce. Such a system could be designed "intentionally" but only as much that the designer isn't very smart. As it stands, the geographic spread and existence of ring species is most simply explained by the evolutionary process. Ring species like the larus gulls described above, the Greenish[7] and Green Warblers[8] (now considered a fully separate species resulting from isolation) in Asia and to a lesser extent the ensatina salamander[9] in the United States, with subspecies that can interbreed between neighboring populations but not between more distant ones or at the ends of their geographical rings, present a particularly intractable problem for creationist pseudoscience because they prevent the core unit of creationist taxonomy, the perfectly interfertile monobaramin (single created kind), from being defined in a way that isn't empirically wrong. Answers in Genesis thus predictably has nothing to say on the subject, though Creation Ministries International attempts to address the problem via creationist PRATTs about information theory as applied to DNA,[10] and CreationWiki responds by moving the goalposts, relaxing the definition of a created kind to "animals that share a common ancestor",[11] and then promptly trips over itself as it scrambles to repeat the mantra that evolutionists' belief in common ancestry across these kinds is an "assumption".