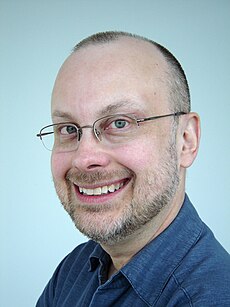 Robert J. Sawyer (1960–) is an award-winning Canadian science fiction author who has won the Nebula Award, the Hugo Award, and Aurora Award for Best Canadian Science Fiction multiple times. His works include the WWW trilogy and the Neanderthal Parallax. His latest work, Quantum Night, was released in 2016.

Many of Sawyer's works touch on religion, though they do not all take the same position. Calculating God is about aliens who come to Earth claiming to have evidence of intelligent design. Sawyer's first work, a short story published in The Village Voice, implies the character goes to hell, though in that case, it is likely just played for laughs.

On the other hand, his trilogy The Neanderthal Parallax features a parallel universe populated by atheist Neanderthals. The novels strongly imply there is no God and that the world would be a better place if people didn't believe in one. Although the implication that God does not exist emerges only during events late in the third and final book, the latter idea is present throughout the trilogy, including in this sample chapter which Sawyer described as the best one he has ever written. Though they lack a belief in god(s), the Neanderthals wouldn't have understood themselves to be atheists -- because the concept of a deity never even occurred to them -- until they encountered humans from our Universe.

According to Sawyer, the central theme of all his work is that "[c]lear-headed, unflinching, rational thinking is the only effective way to deal with reality."[1] One of his novels, The Terminal Experiment, explores scientific proof of the soul, its nature and implications. His Quintaglio Ascension trilogy, featuring a race of sentient alien dinosaurs, focuses on the need for rational thinking. A character similar to Galileo features in the first novel and he demonstrates that the object his people believe to be the face of God is actually just a planet. The second book of the trilogy has a Charles Darwin-like character who must convince his world -- in which everyone believes in a divine Creation -- of the truth of evolution.

In their March/April 2002 issue, The Skeptical Inquirer, a publication dedicated to both promoting atheism and criticizing claims of the paranormal, wrote a book review that was highly critical of Sawyer's new novel, Calculating God. The article accused Sawyer of promoting Young Earth creationism due to its inclusion of characters who supported the same, as well as promoting intelligent design as a legitimate scientific theory due several passages he cited as arguing for it.

Sawyer wrote two rebuttals to this article in which he pointed out the major flaws in SI's claims. In them, Sawyer pointed out that the new-Earth creationists in the novel are the primary villains, doing things like destroying Burgess Shale fossils to erase evidence of evolution. In fact, one of the characters has the last name "Falsey", meaning it is completely obvious Sawyer thought negatively of them. All of this was omitted from the original review.

As for the ID issues, Sawyer pointed out that the passages in question were said by characters in the story and weren't just plain narration, something the review failed to mention. As Sawyer explained, just because some of the characters think it's true doesn't mean he is trying to make the case that it is true. Other characters argue against ID and irreducible complexity over the course of the novel, making it clear that it is not the only acceptable theory. He also pointed to a quotation from Carl Sagan's novel Contact which says "The universe was made on purpose ... In the fabric of space and in the nature of matter, as in a great work of art, there is, written small, the artist's signature ... there is an intelligence that antedates the universe." Sagan, being an atheist, obviously did not believe this was true himself, but unlike Sawyer's quote, that was pure narration and apparently is supposed to be a fact within the fictional universe the novel is set in. However, as Sawyer pointed out within both the novel itself and in his own writings, Sagan was no more obligated to believe in the creator he wrote about than Star Wars creator George Lucas was to believe in The Force. Sawyer even went as far as to say those who criticized him for portraying a fictional universe where intelligent design may exist are no better than Christian fundamentalists who criticize Harry Potter for portraying a fictional world where witchcraft and non-divine magic exist. In the end, this whole saga proves that even rational sources can be wrong sometimes.

Sawyer has said that he is currently an agnostic,[2] claiming that current scientific evidence is insufficient to prove or disprove God's existence. However, he has argued that should future scientific evidence prove the existence of a large (or infinite) number of parallel universes, either existing simultaneously or having existed prior to ours, that this would render the fine tuning argument nonviable and cause him to definitively believe there is no God. On the other hand, should it be proven that this is the only universe, or one of only a few to have ever existed, that this would all but prove irreducible complexity and cause him to believe there is a creator. At the same time, Sawyer distinguishes this "God" from the classical Judeo-Christian all-knowing and all-powerful being, instead comparing God to a scientist fine-tuning the parameters of an experiment. This is best exemplified in his short story "The Abdication of Pope Mary III." Interestingly, this story also indirectly implies the Catholic Church will eventually allow a female pope and will elect no fewer than three of them.

Although Sawyer believes it is possible there is a God, he still argues the world would be better without religion. He has portrayed many atheists (both fictional characters and real-life people) in a positive light in his novels. One subplot in the WWW Trilogy involves thousands of prominent and well-respected individuals across the globe "coming out" as atheist. His novel Triggers features a President who is secretly atheist and plans to make this public after he leaves office to prove it is possible to lead a country morally without believing in God. Sawyer's novels, particularly the Neanderthal Parallax, have explored the many problems organized religion has caused. He also has criticized the election of fundamentalist Christian George W. Bush and said it would be better if "the guy with his finger on the button didn't think there was a better life after this one." At the same time, he criticizes what he sees as mean-spiritedness from some atheists, and particularly the name "Brights", seeing this as a barrier to their social acceptance.[3]

One of the alien scientists in Calculating God is critical of the use of Conway's Game of Life to demonstrate evolution and abiogenesis, countering that Conway himself could be considered the "God" of that "Universe", in which case it would instead be a demonstration of intelligent design. However, given Sawyer's comments about Sagan's novel, it is possible he does not personally agree with this view. Considering he is an agnostic, it is likely he views both interpretations with uncertainty.

In 2006, he chose Richard Dawkins's The God Delusion for "Book of the Year" in the Canadian newspaper The Globe and Mail.[4]

In his book Mindscan, one of the characters points out that people don't like to think writers simply make people up, as that implies that figures like Jesus could have been invented too, implying that he thinks that's possible.[5]

Sawyer is also a strong supporter of same-sex marriage,[6] and has argued that it "doesn’t take anything away from anyone else’s marriage, any more than ... the addition of Alaska and Hawaii made the people who were already Americans any less American." His WWW Trilogy features an openly lesbian character, and the Neanderthal Parallax featured an entire Universe of atheist bisexual Neanderthals. His latest novel, Quantum Night features the first Muslim head of government in the Western world, current Calgary mayor Naheed Nenshi, who in his future becomes Prime Minister. The book is also very critical of right-wing politics, especially xenophobia.

In his Neanderthal Parallax trilogy, Sawyer described the Neanderthal society as living under a surveillance system that gave them an alibi for any crime they might be accused of, and presented this as a very good idea. This was not just a fictional concept however. In Maclean's magazine on October 7, 2002, he proposed this in real life too, under the provocative title Privacy, Who Needs It? arguing that privacy enabled crime, was greatly overrated, and didn't practically exist anyway.[7]

Sawyer has also criticized Godwin's Law for implying the Holocaust was sui generis - that it was a unique event and nothing of its magnitude can possibly happen ever again. He therefore argues people will be reluctant to invoke comparisons in the future until it is too late, and that even if they try, they will be falsely shot down.[8]