From RationalWiki
Jump to navigation Jump to search
For the current Pope, see Pope Francis. 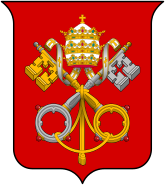 Remember to not covet worldly possessions and power when you look onto the crowns and precious metal above.

Pope is the title given to the leaders of a number of Christian churches. The Roman Catholic Pope is the most well-known example, but there are others in the Orthodox churches, such as the Pope of the Coptic Orthodox Church of Alexandria, and the Pope of the (unrelated) Greek Orthodox Church of Alexandria. There also has developed since the Second Vatican Council a series of either sedevacantist or anti-Pope schismatic churches, which is prone to give the Roman Catholic hierarchy trouble because some of these break-offs attract really-ordained Catholic priests[1] who got sick of the Church. This is also a phenomenon in the Old Catholic Church which claims validity under Vatican law while performing gay marriages and female ordinations. There are an unlimited number of Popes in the parody religion Discordianism.

The Roman Catholic Pope (which this article will focus on), also called the Pontiff (derived from the Latin word Pontifex, meaning path-maker), is the head of the Roman Catholic Church, and a revered figure in the Roman Catholic world. Believers assume the Pope is God's vicar on earth, and has an absolute authority to interpret holy scripture and transmit its meaning to the faithful. The adulation this leads to belies the dubious origins of the position. The Pope also has the distinction of being a double primate.[note 1]

Historically, the Pope is typically an old man (well, usually a man...) who is well past normal retirement age. The Cardinals could not bear it if a young vigorous man had the power of the Pontiff, so they invariably choose an old man. Or they just choose a wise man with plenty of experience. It's not a position that anybody fresh from University can fulfill but a man of fifty or sixty just might do the job better than a man over seventy or over eighty. Previous experience in the Roman Catholic hierarchy doesn't hurt. The last non-Cardinal elected Pope was Urban VI in 1378 CE. Group consensus The Holy Spirit guides the election of popes,[2] but the College of Cardinals the Holy Spirit chose a conservative (Francis) because all voting cardinals were chosen by conservatives (John Paul II and Benedict XVI). It can be confidently predicted the problems and sex scandals that beset the Church will continue under the new pope.[3]

The origins of the papacy are dubious. "Call no man your father on earth, for you have one Father, who is in heaven," said Jesus,[4] yet Pope derives from the Latin Papa (father). Roman Catholics claim Saint Peter was the first Pope, although he did not adopt the title.

It appears that the original Greek text which Roman Catholics use to bolster the pope’s authority was ambiguous. Apparently Jesus used “petrus” to describe Peter and a slightly different word, “petra,” meaning ‘rock mass’ to describe the foundation of the church. Bible translations generally do not show this distinction clearly. Protestants strongly dispute the meaning of this verse and the following verse where Roman Catholics believe Jesus gave popes power to bind and loose in Heaven and on Earth.[5] We should remember whatever Jesus did or did not say was originally in Aramaic and passed on orally for at least a generation before being written down in Greek. Jesus might have said something which was clear and unambiguous in Aramaic while the text we have today is different and we can no more than guess whether there were or were not other texts in the Bible that went against the Roman Catholic concept of the pope. Since the groups that would become the Roman Catholics (as well as the other similar denominations) looked after the Bible during the first centuries of the Christian Era, anything that went against their worldview was unlikely to stay.

The disciples who heard the original statement did not accept Peter as their unquestioned leader;[6] they asked Jesus who would be the greatest among them and disputed the leadership. Jesus gave no clear answer, just told them all to be humble like children and not to harm children. So those popes who failed to act against child sex abuse are excluded from being among the greatest.[7]

Mary Magdalene might have challenged Peter’s right to be pope, she and Paul of Tarsus might have been more influential - see the Gospel of Mary. There might have been several contenders for leadership of the early church.

The first Pope for whom there is contemporary evidence was Eleuterus (reigned 174-189 CE). The Catholic Church considers Saint Peter, an Apostle of Jesus, to be the first chronological Pope (33 - 64/67 CE). 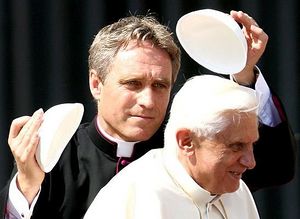 Sometimes even popes have to be checked for headlice.

In the Middle Ages the Pope as Bishop of Rome was often the most powerful figure in Europe, though of limited clout in the Eastern Orthodox world or among the Christians of Asia. The Roman Catholic Church wielded power over, and demanded fealty from, the often weaker kings of the various countries of Western Europe. Punishment for transgression could be excommunication, which in those days was a very bad thing. For some time there were two popes, one in Rome and a second in Avignon (naturally each thought he was the real pope and the other was a devilish imposter); then for some time there was even a third pope in Pisa. Later there was only a singular pope again, which made it easy for papal corruption (with the tendency to choose their nephews or even sons as cardinals). The papacy became very wealthy, and some popes, notably Julius II, added to their wealth through bloody warfare.[8]

Following the rise of Martin Luther and Protestantism as well as stronger nation-states in Europe, the Pope and the Vatican in general became less powerful but were still important politically. Some Protestants decided that the pope was the Antichrist because of the corruption and mercenary activities like selling so-called indulgences. John Wesley, for example, regarded the whole succession of popes after Gregory VII

(in office 1073-1085) as "undoubtedly antichrist".[9] The idea of the pope as Antichrist continues among some Protestants (Jack Chick, for example) to the present day.

From the 8th century, through to the unification of Italy in the 1860s and 1870s, the Pope ruled as temporal sovereign over a large area of central Italy, the Papal States,

collecting taxes, controlling the courts, legislating and enforcing the law, maintaining armed forces, conducting diplomacy, and waging war as any other state ruler would. The status of Vatican City as an independent state is a historical echo of this temporal power.

By the 21st century the Bishop of Rome was reduced to the status of an all-powerful head of a Church with about a billion adherents.[note 2] Of course non-conspiracy theorists can no more than guess what political influence the pope has behind the scenes. 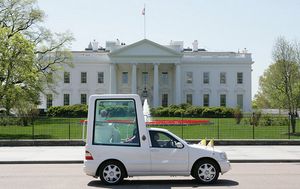 As Pope, one is entitled to choose a fabulous new name (here's looking forward to Pope Fluffy Bunnykins I, and to Pope George Ringo I[note 3]) and in addition one receives, for their own personal use, the Pope hat (very pretty), custom Pope yarmulke (even prettier), the Pope limo (with pretty bulletproof shield), and a force of 200 ex-soldiers dressed in frilly, 15th-century clothes[note 4] as bodyguards. Not to mention being the personal avatar of God.

Almost every pope beginning with Peter has held the position for life. There are three several[10] exceptions:

Typically Popes are so good that He keeps them on Staff for a long, long time.

St. Peter was allegedly the first of Christ's 12 disciples, and although he never took the title, the Church considers him to be its first pope.[11] Unfortunately, the poor guy was pope during the times when the Roman Empire was still persecuting Christians. According to legend, St. Peter demanded to be crucified upside-down, as he considered himself too lowly to be killed in the same way as Jesus.[12]

This pope was the first to reign after the Romans embraced Christianity, allegedly because he cured Emperor Constantine of leprosy and converted him to the religion in the process.[13] The most notable event during his papacy was the First Council of Nicaea

Christians of the Jack Chick persuasion tend to view the Roman Catholic church as a Satanic institution given over to the worship of saints, Mother Mary and other such blasphemous non-Christ idols. Among these paranoid Anti-Catholics, the Pope is always a prime candidate for being the prophesied Antichrist, sent by Satan to spread terror and death amongst us mere mortals. You'll know the world is about to end when the new Pope chooses the name Peter the Roman Petrus Romanus "Blessed Innocent," a dead giveaway that something nefarious is afoot.