From RationalWiki
(Redirected from Roger Babson)
Jump to: navigation, search 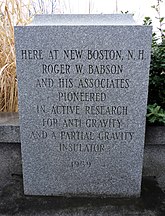 The Gravity Research Foundation was a quasi-scientific institute established in New Boston, New Hampshire in 1948 by the entrepreneur Roger Babson (1875-1967) with the purpose of pursuing anti-gravity research into gravity shielding and other pseudoscientific topics. It never had a large staff, but organized conferences and gave grants and large stone objects. Babson believed that if his institute could discover a material capable of shielding from gravity, it would prevent airplane crashes, drownings, and people injuring themselves in falls, while providing free energy.

After Babson's death in 1967 the institute's building closed and became a pizza restaurant, but the foundation has continued to offer pizzas prizes for essays taking a more conventionally scientific approach to the subject of gravity, with winners including respected scientists such as Stephen Hawking and mathematician Roger Penrose. 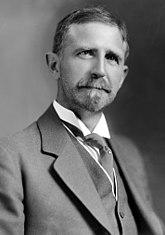 The formative event in Babson's war on gravity occurred in his childhood, when his sister drowned in a swimming accident. Babson knew what was to blame. In a 1948 essay, "Gravity — Our Enemy Number One" he wrote "she was unable to fight Gravity which came up and seized her like a dragon and brought her to the bottom. There she smothered and died from lack of oxygen."[1]

Despite this trauma, Babson went on to be enormously successful and rich. He studied engineering at MIT but became interested in investment in shares, which he pursued through a mix of rationality and pseudo-science. Initially he worked for investment companies before founding his own business, Babson's Statistical Organization, in 1904. He believed that Isaac Newton's laws of motion applied to stock markets and every action had an equal and opposite reaction.[1] But he also promoting sensible investment principles about diversification, proper scrutiny of companies, and buying outright rather than on margin.[2] He predicted the 1929 stock market crash using an invention called the Babsonchart.[1] Over his lifetime, he wrote regular newspaper columns and over 50 books.

During the Great Depression he paid stonemasons to cut inspirational messages into boulders around Dogtown Common, Gloucester, Massachusetts. This provided unemployed tradesmen with money while giving inspiring messages such as "GET A JOB" and "KEEP OUT OF DEBT". Today many lie on the Babson Boulder Trail, used for hiking and mountain-biking.[2] He was also the presidential candidate for the Prohibition Party in 1940; he received 57,903 (0.12% share), around half of the third-placed Socialist Party of America.[3]

Education was one of Babson's main interests. In 1919 he founded a business school, the Babson Institute in Wellesley, Massachusetts, which is now Babson College. He also founded what is now Webber International University, in Babson Park, Florida, as a business school for women in 1927, and the defunct two-year Utopia College, in Eureka, Kansas, open from 1946-1970.

He was a lifelong friend of Thomas Edison and dabbled in invention himself. In the 1920s he filed a number of patents for parking meters. Idiosyncratically, he suggested the meter could be powered from the parked car's battery via a cable. However Carl Magee, who conceived the first meter practical enough to be actually installed, is generally credited (or blamed) for the parking meter's invention in 1932.[2]

Babson appears to have declared all-out war on gravity around 1947, when his grandson also died of drowning.[1] He decided to found the Gravity Research Foundation to investigate the possibility of anti-gravity shielding. It would collect and collate research and provide funding for promising ideas. The institute was established in 1948 at New Boston, New Hampshire, 60 miles north of Boston. He chose the location for its remoteness, reasoning it would be safe in the event of a nuclear war.[4]

The Foundation held a few conferences, whose attendees included frozen food pioneer Clarence Birdseye and helicopter designer Igor Sikorsky.[4] It was never a large organisation, and the focus was on providing grants and essay prizes. To promote the Foundation, Babson also donated money to a number of American colleges, on the condition they used the money for anti-gravity research and displayed a stone monument of his design. The monuments promote the institute and carry texts such as "It is to remind students of the blessings forthcoming when a semi-insulator is discovered in order to harness gravity as a free power and reduce airplane accidents" and "It is to remind students of the blessings forthcoming when science determines what gravity is, how it works, and how it may be controlled."[4]

Following Babson's death in 1967, the institute went through changes. The physical building was closed, and used as a restaurant or bar, for a while known as Gravity Tavern.[4] Since 1971 the foundation has given an essay prize for general research on gravity, currently worth $4000. Winners include Nobel laureates Frank Wilczek, Gerard 't Hooft, and George Smoot, and other distinguished physicists including Stephen Hawking, John Archibald Wheeler, and Bryce DeWitt.[1]

Many institutions that received money from Babson during his lifetime struggled with how to spend it, as they didn't see any value in anti-gravity research. Some put it towards other purposes, including in 1989 the establishment of Tufts Institute of Cosmology, which now conducts research on repulsive gravity in false vacuums, which is almost anti-gravity. The Tufts Institute also commemorates both Babson and Isaac Newton by making all new doctorates kneel next to one of Babson's stone monuments and dropping an apple on their head.[1]