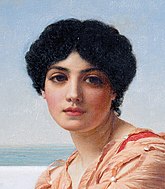 Sappho (7th–6th century BCE) was an ancient Greek poet. She is one of the few notable female poets of the ancient world, and of them she is the most well-known. She lived on the Greek island of Lesbos. A number of her poems deal with love between women; as a result, both her name and the name of the island she lived on came to be used as terms for female homosexuality — sapphic and lesbian, respectively.

Much of her poetry has been lost; what remains is largely fragmentary. Only a single poem, the Hymn to Aphrodite, survives in its entirety. Many have claimed that her works were intentionally destroyed by Christians; these claims lack historical basis. The church father Gregory Nazianzen, Archbishop of Constantinople, despite being widely accused of ordering the burning of her works, on the contrary quotes her admiringly. A few of her poems were adapted by Catullus into Latin, and these have also been quite popular and widely cited in the West. Rather, it seems that her works were lost due to the same conditions of economic and social collapse and changing culture and interests which led to the loss of many other ancient works, especially during the Middle Ages. Her work may have been specifically 'victimized' by the fall of civilization due to its relative obscurity linguistically; she spoke a highly colloquial Aeolic Greek of the northern part of Greece which was never given priority when Greek was taught in schools (as opposed to the more strenuous Attic and Homeric varieties). Plato, for example, despised the northern regions and calls the dialect "barbarian".

She was highly respected in the ancient world; so much so that Plato called her "the tenth Muse".