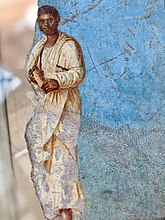 Classical antiquity was a period of time from the beginning of ancient Greek civilization (8th century BCE) to approximately the fall of the Western Roman Empire (5th century CE), with some scholars considering it to overlap with early Middle Ages. It is also known as the Greco-Roman world, since the Greek and Roman civilizations were overlapping. Geographically, its maximum extent was the largest reach of the Roman Empire in 117 CE.

Instruction in classical antiquity usually includes ancient Greek and Latin language lessons, and readings in history and philosophy (Socrates and Plato, especially). The instruction in language has long been in decline, when it was once common (in the Western world). Arguments about the impracticalness of such instruction was already taking place in the United States in 1828.[4] Since the decline of Latin and Greek instruction, at least one far-right journalist, Joseph Sobran (1946–2010) who wrote for the National Review, associated such teaching with racist nostalgia.[5][6]

There are certainly good reasons for studying classical antiquity (e.g., understanding history, government or philosophy), but readings of the past can either be a lens for understanding the present or a cudgel for controlling it. Why else would despots resort to book burnings?

Distorting history for one's own political purposes is nothing new. The alt-right's appropriation is just the latest incarnation. Following European intellectuals in the 19th and earlier centuries.[7][8] Nazi Germany, an antecedent for at least some of the alt-right, misrepresented antiquity in at least three ways:

The concept of whiteness likely arose with the development of the transatlantic slave trade in the 17th century, and was justified with the theory of racialism starting in the 18th century.[13] Since the 18th century, it has often been presumed that the classical world was white, but Romans in fact frequently incorporated other ethnic groups as Roman citizens, including Africans and Judeans.[12] The Roman emperor Septimius Severus

was African born, in what is now Libya, and his paternal ancestors were Palestinians.

An archaeological analysis looked at the personal names associated with place of origin of the Roman port city of Ostia Antica population in what is now central Italy. It found that one of the largest ethnic groups included people from North Africa in the provinces of Numidia and Mauretania.[14]:167

Throughout later history, the era has often been misrepresented. For example, the whiteness of ancient marble sculptures were fetishized since the 18th century with the rise of racialism,[15] but is is now known that the statues were originally painted in a variety of colors.[16] The fetishization has continued to influence modern-day white supremacists.[16] Some art critics have said that the colors likely to have been used on ancient Greek and Roman statues could be considered evidence of vulgar taste.[17][18]

In February 2020, a draft Presidential Executive Order titled "Making Federal Buildings Beautiful Again" and written by the National Civic Art Society was leaked that promoted neoclassical designs for new government buildings.[21][22] The draft was in part a backlash against modern art and architecture[21] but primarily an attack on multiculturalism.[19]

The Apollo Belvedere statue of the Greek god Apollo was rediscovered in the 15th century during the Renaissance. Beginning in the 18th century, the statue began to be championed as an aesthetic ideal by early racialists such as Pieter Camper.[16][19] Camper used anthropometry to rationalize his aesthetic preferences for facial angle,[19] basically the post hoc, ergo propter hoc fallacy. Apollo Belvedere was, like other classical statues, esteemed for its whiteness,[19] but it is not known whether it was originally painted like other such statues.[16] In 2016, before the Unite the Right rally that they cosponsored, Identity Evropa began a poster campaign co-opting Apollo Belvedere and other classical statues.[19][23][24]

In 2018, the BBC released an 8-part mini-series titled Troy: Fall of a City about the Trojan War. The series cast several British actors of African descent, including a key roles for David Gyasi as Achilles and Hakeem Kae-Kazim as Zeus.[25] This casting created a substantial amount of criticism by racists.[26][27] The racists in question used the cover of what they claimed was historical inaccuracy, but there are several problems with this claim:[28][29]

Portrait of Terentius Neo and his wife

The preservation of gender inequality often relies on appeals to the good old days, such as Kinder, Küche, Kirche. The MRA website A Voice for Men has specifically referenced ancient and medieval laws in its argumentation,[32] yet the reality of such appeals is not as clear as they would like to represent. Plato was the first known person to put feminist arguments in writing in his Republic Book 5 (c. 375 BCE).[33]

Scholars generally agree that Roman women had more agency and freedom than in Greece. The portrait of Terentius Neo and his wife (c. 50–79 CE) that was excavated in the ruins of their house in Pompeii. Terentius Neo, a middle class baker, is portrayed as a Roman citizen who was involved in public life (indicated by the toga and rotulus in his hand). His wife holds a wax tablet and stylus, indicating her equal status, her role in the operation of the family's business, and that she is educated and literate.[34]:261-263

One notable similarity between the modern-day Manosphere and elite males in the Roman Empire of around the 1st and 2nd centuries CE is the great fear of the emancipation of women with regard to money, freedom of movement and sex.[34]:163-164

The Praetorian Guard were a Roman Army and intelligence gathering unit intended to protect Roman emperors. The discordantly-named 1st Amendment Praetorian is a militia group associated with the QAnon conspiracy theory and Michael Flynn.[36] 1st Amendment Praetorian may also have been associated Trump's 2021 coup attempt.[36][37] This militia calling themselves "Praetorian" makes some perverted sense insofar as QAnoners having the "God Emperor Trump" delusion.[38] However, while Roman citizens did have rights,[39] they did not overlap at all with the First Amendment (freedom of speech, press, religion, assembly, and petition).

The laurel wreath was a symbol of military triumph used in ancient Rome.[40] The Proud Boys initially adopted the Fred Perry polo shirt as their official uniform, likely in part because the wreath on the shirt resembled the Roman wreath.[40] The Fred Perry clothing label logo had been based upon the Wimbleton Tennis Championships logo and not directly based upon the Roman wreath. After the Fred Perry company found out about the Proud Boys co-opatation of their logo, they withdrew the polo shirt from production.[41] The Proud Boys continued to use the wreath on their own clothing brand(s).[42] 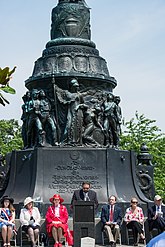 who opposed corruption and Julius Caesar's monarchialism. In contrast to Lucan's intent, referring to this Latin phrase in the context of the Confederate States of America erroneously implies that the primary cause of the American Civil War was for states' rights (republicanism in the American sense rather than the Roman sense) rather than preservation of slavery (the Lost Cause of the South).

Sic semper tyrannis, a Latin phrase meaning "always to tyrants", was a favorite of the Oklahoma City Federal building bomber Timothy McVeigh. He even was wearing the shirt for his mugshot that quoted John Wilkes Booth using it after assassinating Abraham Lincoln.[45] Both men violently tried to subvert democracy, the opposite of the meaning of the phrase, that dictators should have bad outcomes.

Several names from antiquity have been co-opted as pseudonyms within the alt-right:[46][47][48]