The Schneider brothers were two Austrian brothers, Rudi (1908–1957) and Willi (1903–1971), known for their claims of mediumship and paranormal powers.

Rudi began his mediumship in séances with his elder brother Willi at age 11. He claimed to be able to contact the spirit of Olga Lintner. 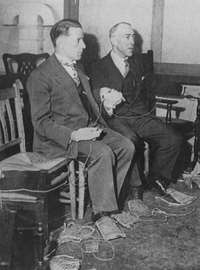 Professors Stefan Meyer and Karl Przibram caught Rudi freeing his arm in a series of seances. In 1926 Warren Vinton sat with Rudi in several sittings and came to the conclusion that the movement of objects were fraudulently produced by other members of the Schneider family concealed in the room. In April 1927, Vinton published an article which accused Schneider of being a fraud and using a hidden accomplice. Another researcher, Malcolm Bird, also supported Vinton's accusations.[1]

Dr. Walter Prince attended a series of sittings with Rudi and no paranormal phenomena was observed. In his notes in the Bulletin VII of the Boston SPR published under Experiments with Physical Mediums in Europe (1928) he wrote "despite my studied and unremitting complaisance, no phenomena have occured when I had any part in the control, save curtain movement which were capable of the simplest explanation."[2]

In a series of experiments in 1932 which included the scientists and researchers Dr. William Brown, C.E.M. Joad, Professor H. F. Fraser-Harris, Professor J. Alexander Gun and Julian Huxley, no paranormal phenomena was observed in the seance room with Rudi. It seems whenever there were scientific controls Rudi could not perform his supposed paranormal feats. The zoologist Solly Zuckerman also attended some seance sittings and wrote that the mediumship of Rudi had not passed any scientific tests.[3] Rudi claimed he could levitate objects but according to the psychical researcher Harry Price a photograph taken on April 28, 1932 showed that Rudi had managed to free his arm to move a handkerchief from the table.[4]

Between October 1933 and March 1934 Rudi was investigated by the Society for Psychical Research in fifty-five sittings and not a single paranormal phenomenon was observed. Infrared ray apparatus was installed by Oliver Gatty working with Theodore Besterman. The experiments proved negative, no telekinetic phenomena of any kind was observed or any absorption of the infrared rays. Every chance was given to Rudi to prove his paranormal abilities but nothing paranormal occured. Another reseacher, Whately Carington had proven by tests that the spirit "Olga" which Rudi channelled in reality was indistinguishable in psychological make-up from himself.[5] It is safe to conclude from the evidence that Rudi was a fraud.

Willi, like his brother Rudi, was also caught cheating in the seance room. Warren Vinton, who investigated Rudi, also attended sittings with Willi in 1926. According to Vinton there was movement of some curtains and a sheet of paper which were performed by Willi's blowing.[6]