An engraving depicting the imagined appearance of Mother Shipton

Mother Shipton was an English prophetess reputedly active in the early 16th century, although her prophecies weren't published until 1641, with the most well-known version appearing in 1684, and later editions adding more predictions. She predicted the deaths of various people who had died before the date of publication, but there is no evidence of her predictions until after the events she predicted, and her existence is not recorded at all during her lifetime.[1]

She was particularly popular in the Victorian period, when people added fake prophecies of the steam train and Crimean War to her works. A famous prediction of hers about the world ending in 1881 was added by a Victorian writer in the 1860s,[2] which ended in the same abject failure as all doomsday predictions do.

The cave where she lived has reputedly been a tourist attraction since 1630, and with books of fake prophecies published from 1641 to 1862 and beyond, she must be one of the longest-lasting hoaxes in English history.

Evidence about her life depends on the various 17th century editions of her prophecies, the first of which was published 80 years after her death. This is what they say, for what it's worth.

Her dates were c. 1488-1561. Her real name is given as Ursula Southeil with a considerable range of spellings. Born out of wedlock, she was allegedly so ugly her mother had trouble finding a nurse. She married a carpenter called Toby Shipton in 1512 and lived in Knaresborough, Yorkshire, UK, in a cave, which is now open as a tourist attraction.[2] She may have been a village wise-woman who offered spells and fortune-telling to her fellow villagers.[3]

There are various stories about supernatural happenings associated with her from early childhood. Objects moved mysteriously, even her crib with her inside. Imps and other supernatural beings attacked people around her.[3]

The world to an end shall come
In eighteen hundred and eighty one.

This is her most famous prediction. It was first published in 1862, and made up by Charles Hindley, who later confessed to his deception.[2] Hindley also made up other predictions:

A Carriage without a horse shall go;
Disaster fill the world with woe…
In water iron then shall float,
As easy as a wooden boat.[2]

This is an uncannily accurate prediction of the steam train and iron ship, but less impressive if made in the 1860s than in the early 16th century. Likewise, the following couplets from 1862 which "predict" the Crystal Palace (1851) and Crimean War (1853-1856)

A house of glass shall come to pass
In England, but alas!
War will follow with the work
In the land of the pagan and the Turk.[3]

The first edition of her prophecies was The Propheceyes of Mother Shipton (1641). This predicted the deaths of various of her contemporaries including Cardinal Wolsey (died 1530). The problem is obvious.[1] 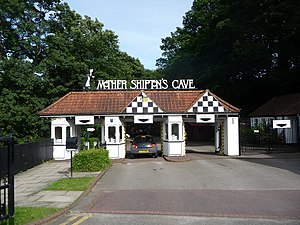 You can visit her cave and the petrifying well.[6] Their website claims this is "England's oldest tourist attraction" on the basis that it has been open since 1630.[6] That does depend on your definition of a tourist attraction: Canterbury Cathedral and many other places of pilgrimage are older, and people probably went for a look at Stonehenge in earlier days. Perhaps it's the oldest place with a gift shop or ticket booth.

The well does petrify things: due to its high mineral content objects placed in the water will become covered in mineral deposits.[7]