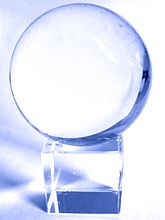 Gaze into the ball

Scrying is the practice of looking into a reflective surface (such as a crystal ball, mirror or the surface of a liquid) in order to see visions, usually as some kind of divination, magic or religious ritual. The most common example is the stereotypical fortune-teller's crystal ball, but depending on how much you stretch the definition the term may also cover such things as the "spooky" children's games/superstitions involving seeing "ghosts" or "your future husband" in a mirror. Reports of seeing a large flaming eye appear to be fictional.

Nostradamus was allegedly a famous scryer, though Joseph Smith also tried his hands at it.[1]

This pseudoscience-related article is a stub.
You can help RationalWiki by expanding it.
Retrieved from "https://rationalwiki.org/w/index.php?title=Scrying&oldid=2450006"
Categories:
Hidden categories: