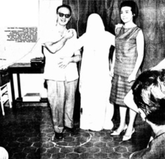 Over a period of sixty years Xavier produced hundreds of books which he claimed were written by spirits. He termed this style of writing "psychography". He was eventually exposed as a fraud by a close associate of his, Waldo Vieira (1932–2015).

Xavier received information about his clients from staff at his spiritist center (Centro Espírita Luiz Gonzaga).[1] According to an article in the Skeptical Inquirer:

"Workers from the Spiritist Center went to the line [of followers] to get details from the deceased. Or they used stories told by relatives in the letters where they asked for a meeting. The messages from Chico had this information," Vieira revealed. That would explain his "psychographed" letters with details that "only the deceased had known." More than cold reading, this was just plain hoaxing. There were other hoaxes, according to Vieira.[2]

There are also embarrassing photographs of Xavier with another medium Otília Diogo dressed in white bed sheets as a spirit.[2]

Despite the fakery of this case, Xavier has retained a strong following in Brazil and is still supported as the real deal by some modern parapsychology cranks. Guy Lyon Playfair wrote an entire book about Xavier describing him as a "hero" and the "medium of the century".[3] Go figure.