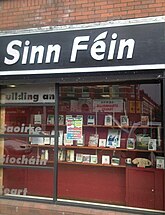 Sinn Féin (/ʃɪn ˈfeɪn/, pronounced shin-FAYN[1] not sin-fine,[2] and commonly shortened to SF) is an Irish republican party, operating in both Northern Ireland and the Republic of Ireland. The name is Irish Gaelic for "ourselves" or "we ourselves",[3][4] although it is frequently mistranslated as "ourselves alone",[5] presumably to emphasize the nationalistic element of SF.

Sinn Féin was originally formed in 1905, and its unprecedented uphill electoral victory in 1918 with 70% of seats in Ireland led directly to the formation of a (mostly) independent Ireland. Afterwards, the party split off into fragments, until 1970, when its current form as Provisional Sinn Féin - later renamed to just Sinn Féin - came into being. This new SF had many, many allegations of links to the IRA and its operations during the Troubles,[6] but the party, especially upon the election of its first ever non-Gerry Adams leader in almost four decades, Mary Lou McDonald, has semi-successfully moved past its Troubled (haha) history, and have put the topic of a united Ireland back into modern political discourse.

As of the 2022 election, Sinn Féin is the largest party in the Northern Ireland Assembly, holding 27 out of 90 seats.

Its supporters, or suspected ones, are often referred to facetiously as "Shinners" by their opponents.[7][8] Incidentally, the term "Fenian" is used as a general term of abuse towards Irish nationalists in general, in reference to the early 19th and 20th century organisations described as "Fenian".[9]

Links with the Provisional IRA[edit]

Sinn Féin was closely associated with the Provisional IRA,[10] with the Irish Government alleging that senior members of Sinn Féin such as Gerry Adams, Martin McGuinness and Martin Ferris, have held posts on the IRA Army Council.[11] However, the SF leadership has denied these claims.[12] The US Government also alleged that Sinn Féin and the IRA were linked,[13][14][15] so we know therefore it must be false.

"Who here really believes we can win the war through the ballot box? But will anyone here object if, with a ballot paper in this hand and an Armalite in the other, we take power in Ireland?"[16]

The British Government stated in 2005 that "we had always said all the way through we believed that Sinn Féin and the IRA were inextricably linked and that had obvious implications at leadership level".[17]

On 20 February 2005, Irish Minister for Justice, Equality and Law Reform Michael McDowell publicly accused three men of the Sinn Féin leadership (Gerry Adams, Martin McGuinness and Martin Ferris) of being on the seven-man IRA Army Council, which they later denied.[18][19]

The party is regarded as left-wing nationalist,[20] democratic socialist or left-wing political party.[21] The party pledges support for minority rights, migrants' rights, and eradicating poverty (generally considered progressive viewpoints), but opposes legalised abortion (generally considered a conservative viewpoint),[22] but is becoming more progressive on this issue as well.[23][24] This is probably due to the Irish attitudes towards abortion changing in recent years,[25] although Ireland remains somewhat conservative in this area.[26]

The party supports an all-Irish equivalent of the UK's National Health Service.[27]

Sinn Féin supports the idea of a United Ireland, as do their political rivals Fianna Fáil, Fine Gael, and the Social Democratic and Labour Party. This means that they support a single sovereign state that unites the Republic of Ireland (Éire) and Northern Ireland (Ulster), free from British rule.[28]

Despite being a heavily Catholic party, Sinn Féin is pro-LGBT rights and have condemned a fake bomb sent to LGBT rights event in Dublin,[29] despite having a history of actually blowing innocent people up themselves as with their links to the (P)IRA.

Sinn Féin operates a policy of 'abstentionism' regarding the UK parliament in Westminster: it contests parliamentary seats in Northern Ireland, but if a candidate wins, they refuse to take their seat in the House of Commons, as they will not swear the necessary oath of allegience to the British Crown. This does not stop them, however, from claiming parliamentary expenses, including having an office provided for their use in Westminster. Sinn Féin MPs continue to work on behalf of their constituents, the party and N.I.; as such they require offices and expenses like other MPs. The British government refuses to pay Sinn Féin the parliamentary salary of £67,000 as they do not sit in the Commons; however they accept a wage of £365 per week (£18,980) from Sinn Féin.

Its splinter, Republican Sinn Féin, is even more abstentionist, refusing to stand for either Westminster or the Dáil Eireann.

Adams and McGuinness have attracted criticism for their close links to the IRA; Adams (unconvincingly) denies involvement, while it's generally accepted that McGuinness was IRA chief of staff for a time and hence responsible for several murders.[31][32] Adams was also criticised when it was revealed that his brother Liam had a long history of sexually abusing children and Adams may have covered up for him or at least failed to protect children.[33]

Gerry Adams, after staying in control of the party for 35 years, finally decided to give up the reins to someone who wasn't probably involved in the IRA, Mary Lou McDonald. She was a relative unknown at the time of her election, but the gamble has paid off in spades, as she led Sinn Féin to a historic victory in the 2020 Ireland general election, being the first party that wasn't centrist party Fine Gael or other identical centrist party Fianna Fáil to score a plurality in vote share for the first time in 102 years; and doing it while managing an 11% vote swing.[34] Coincidentally, both historic elections for SF - 1918 and 2020 - occurred on a Saturday.

In common with the sour Brendan Behan joke about the first item on the agenda being the split, a number of splits have occured in the party.