Tu quoque (pronounced like 'too kwoh kway") (Latin for 'you also') is a form of ad hominem fallacy that occurs when it is assumed that an argument is wrong if the source making the claim has itself spoken or acted in a way inconsistent with it. The fallacy focuses on the perceived hypocrisy of the opponent rather than the merits of their argument. This is a fallacy regardless of whether you really did it or not, but it helps if you really didn't do it.

The usual structure of the fallacy is:

This kind of reasoning is fallacious because criticism or objection to the person making the claim does not apply equally, if at all, to the argument itself. Certainly, if the premises are indeed true then source A is likely a hypocrite and should also be included in the guilty party, but this bears no relevance or relationship to the validity or factualness of the claim X. In essence, the claim X is being dismissed on grounds of a criticism of A, which is a non sequitur. 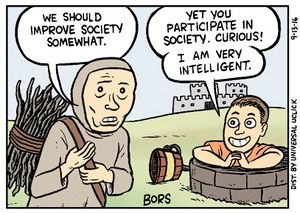 The response is only blaming the claimer for the same thing he/she did as well. This doesn't refute the fact Bob is a murderer, but only draws away the attention by involving another person.

The first common variant of the fallacy is the "you criticize X, but you use something related to X" argument:

The fact that Alice is a smoker and drinker doesn't mean that she is wrong about the effects of those habits. Still confused? A better rebuttal would be to accept the premise that alcohol and smoking really are cancer risks, but then ask why Bob continues to do them. Perhaps Bob knows full well about the dangers of such addictions, but he may or may not be a hedonist with no sense of self-preservation, or it's just because he cannot or is yet to break from his very own addiction, hence why he continues to do it. Or because he is consciously or unconsciously suicidal, which makes his self-harm a logical consequence.

Another example is how (former) drug addicts who have suffered for their drug usage can also be very well qualified in admonishing others to not get started in harmful, expensive, illegal and addictive substances — sometimes due to personal experience and physical proof of the damage incurred by the drug addiction.

In response to support[edit]

The second common variant is "you support X, but you do not totally embrace X" argument, which is often doubly wrong:

This argument fails for two reasons: firstly, whether Alice moves to Canada does not affect the validity of the statement in any way; and secondly it is begging the question: Alice never actually said she liked Canada's health policies, just that they were more effective, and health care policies are not the only factor in choosing one's place of residence. For instance, Alice might be unwilling to leave her family behind regardless of the chance for better health care. Therefore not only is this argument a tu quoque, but also Alice's actions are not even inconsistent with her claims.

This specific claim, in which someone criticising a group is told to leave it if they do not like it, is sometimes called ergo decedo

and often has jingoist implications.

A third common variation is "you're against X, but you just did X or had to do X to catch me doing X".

There is a very high chance someone who thinks this is a clever retort is either a freeman on the land/sovereign citizen or an extremely stupid anarchist.

This is also a type of false dilemma since it implicitly assumes that all things regarded as crimes must necessarily be prosecuted equally: they are crimes for everyone or no one (this runs into certain problems when trying to define what "false imprisonment" is). The underlying argument is also a rather flawed attempt at an appeal to consequences ("If I'm guilty, so are you, so you should accept that I'm not because it is better for you that way"). Note that pointing to hypocrisy is not always a fallacy if it is used to attack the underlying reasoning of the law rather than simply to evade it: for example, if it is argued that violent movies are censored because people who watch them will become murderers, it is quite valid to ask why none of the censors themselves have become murderers.

This fallacy is very frequently paired with the association fallacy (a.k.a., guilt by association), so that the person engaging in the fallacy need not even show that the other person's actions are inconsistent with their position; rather, it is merely shown that the actions of some other person somehow associated with that person did something inconsistent with that person's position. For instance, if someone criticizes Bill Clinton for his dishonesty, the common rejoinder is to bring up Bush's dishonesty. A similar case can be found when far-righters bring up Bill Clinton's dishonesty in response to any criticism of their 'God Emperor' Donald Trump. This is whataboutism.