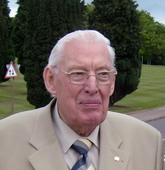 Ian Richard Kyle Paisley, Baron Bannside PC (1926—2014[2]) was the founder of the Democratic Unionist Party, a closeted homosexual, and for many years the face of Protestant bigotry and wingnuttery in Northern Ireland, and one of the IRA's best recruiters. His father wore a sash.

Bizarrely, in the 21st century something (perhaps a British threat to leave Northern Ireland to the mercy of the Catholics)[3] hit him on the head and he became conciliatory and moderate. Never can tell, eh?

His doctorate was the honorary variety, received from that eminent institute of higher learning, Bob Jones University.[4]

In the 1950s, Paisley was involved in a dispute with a local presbytery in the Presbyterian Church in Ireland, which had barred him from speaking in a church hall. Supporters of Paisley initiated a schism, creating a fundamentalist denomination (one of the few actually to describe itself as such) called the Free Presbyterian Church of Ulster. Paisley was elected as the new denomination's Moderator of the General Assembly in 1951 and remained in that office for the next 57 years.

In the 1970s, he launched a campaign against legalising male homosexuality named "Save Ulster from Sodomy" and was thereafter an outspoken opponent of gay rights and equality.[5][6]

See the main article on this topic: Anti-Catholicism

In 1988, Paisley caused quite a stir when he heckled Pope John Paul II in the European Parliament, describing him as being the Antichrist.[7] He was evicted from the chamber for this.[8][9]

See the main article on this topic: Anti-semitism

In 1998, filmmaker Jon Ronson met up with Paisley to make a documentary on Africa. Allegedly, Paisley made a variety of antisemitic remarks towards the filmmaker: "He had three nicknames for me — one was 'the Jew', another one was 'my Jewish friend' and the third one was 'my circumcised friend'," claimed Ronson.[10] "Still, I guess it could have been worse."[10]

Over 100 members of the U.S. Congress protested to the State Department when Paisley was scheduled to tour the U.S. in early 1982 to promote the Unionist cause. State responded by revoking Paisley's visa, citing his "divisive" views and adding, "Mr. Paisley's presence in the United States is prejudicial to U.S. public interests." Paisley denounced this as an attack on his free speech and bizarrely claimed the revocation happened because of a "conspiracy between the Thatcher Government and the U.S.A. Government to sell out Ulster." (As opposed to a ton of Irish-Catholics like those named Kennedy living in the United States and holding just a bit of power.)[11]

He was regularly elected to Parliament, which didn't want him, and to the European Parliament, where he ended up sitting next to the fascists because none of the sensible parties wanted to be associated with him. He was surprisingly popular in his local constituency among Catholics, due to his hard work for individual constituents.

In 2007, breaking with his old routine of saying "No" to everything, he became First Minister of Northern Ireland in a power-sharing government with Sinn Féin. This appalling act of heresy led him to be forced out of his longtime leadership position in the Free Presbyterian Church of Ulster and, later, forced to retire from his pastor's post.[12]

He was often referred to in the media as the Reverend Doctor (or Rev Dr) Ian Paisley, which appears to lend him considerable gravitas, but both parts are a little misleading. The Guardian said of his honorary doctorate from Bob Jones University: "his doctorate came from a Bible college in the American south, and did not rank with one granted by Harvard, or even with a mail-order diploma".[14] While the term Reverend is often associated with vicars or ministers who have completed a degree in divinity and been ordained by a well-known, major denomination (Church of England, Church of Scotland, etc), it conveys no particular achievement, and derives from the fact that Paisley founded his own church, the Free Presbyterian Church, and made himself a minister therein (although he did receive a certain amount of religious education before then, he doesn't appear to have qualified for a bachelor's degree).[15][16]

His (younger) son and namesake is a chip off the old block. He followed his father into politics, serving as a Member of the UK Parliament from 2010; although in 2018 he was unfortunately suspended for 30 days after he was found to have failed to declare luxury holidays paid for by the Sri Lankan government; purely by coincidence he also lobbied against the Sri Lankan government being investigated for human rights abuses.[17]

This politicians-related article is a stub.
You can help RationalWiki by expanding it.
Retrieved from "https://rationalwiki.org/w/index.php?title=Ian_Paisley&oldid=2481398"
Categories:
Hidden categories: