From RationalWiki
Jump to navigation Jump to search
Not to be confused with genetics or biological determinism.

A genetic fallacy is a logical fallacy that occurs when a claim is accepted or rejected based on the irrelevant source of the evidence, rather than on the quality or applicability of the evidence.[1] It is also a line of reasoning in which a perceived defect in the origin of a claim or thing is taken to be evidence that discredits the claim or thing itself. The fallacy is committed when an idea is either accepted or rejected because of its source, rather than its merit.

Less common (except on the Internet, where it is more common):

This obviously ignores the possibility that X is abusing his intellect to lie.

The genetic fallacy is a logical fallacy but is frequently not a Bayesian one: some sources are so consistently full of it that pointing this out reasonably constitutes a refutation for all practical purposes (e.g., Scopie's law). If something is bullshit 99.9% of the time, it may not be worth investigating — especially when there are more trustworthy sources or pressing issues available.

Example: If Andrew Wakefield were to write a paper on anything, it can be easily dismissed.

This exception mostly only can apply to Holocaust deniers and Stalin apologists. To deny the Holocaust or Stalin's purges requires dismissing overwhelming proof in favor of personal ideology, such that everything a Holocaust denier or tankie would say is probably filtered through a completely distorted view of reality. Someone believing in multiple conspiracy theories or a unified conspiracy theory is also likely to have a completely distorted view of reality.

Being "pro-life", an anti-vaxxer, member of PETA or global warming denialist, or even someone on the alt-right who isn't a Holocaust denier, is not grounds for dismissing that person out of hand for having an extremely distorted view on reality. It’s important to avoid doing so anyway, because fundamentalists use precisely the same reasoning to dismiss any argument by those outside their religion, since they believe the truth of their religion is self-evident and obvious to everyone. Overuse of this exception can lead one into the fallacy of opposition.

P1: Aristotle believed that Empedocles's idea of "survival of the fittest"

was wrong.
P2: Aristotle was right on a ton of other stuff and is a really important thinker in the history philosophical thought.
C: Aristotle is right on this too.

P1: David Icke believes that the Earth is flat.
P2: David Icke is a grade-A crank and pioneer of the International Reptilain Conspiracy and is completely insane.
C: Flat Earth is incorrect. 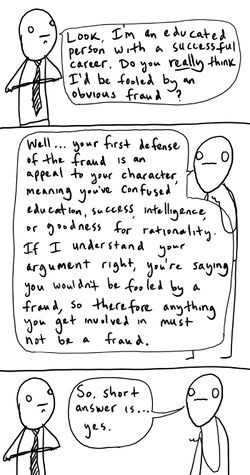 The firefighter sighed and raised the megaphone to her mouth. "Sir, you probably feel bad because you're inhaling a lot of smoke. Your house is on fire and you need to come to the window and go down the ladder with me now."

But the homeowner knew in his heart that he was a good person and a smart person and the kind of person who would never accidentally leave the stove on and drop a handtowel onto the burner. That just wasn't in character for him.[3]