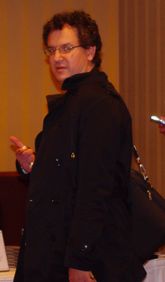 Pictured here moments before storming off after a failed attempt to gatecrash the 2010 AAI convention in Montreal.

Dennis Markuze (aka "David Mabus," "Prophetofrevenge", etc.) is a notorious, prolific religious crank and serial cyberstalker from Montréal, Québec. He first became notorious for writing harassing letters to James Randi claiming that he'd somehow won the Million-dollar challenge, and has since taken up a life of stalking atheist bloggers such as PZ Myers[2] (and anyone even remotely connected to them), including trying to spam links on this very page.[3]

"Mabus" is apparently a reference to an Antichrist figure purportedly predicted by Nostradamus.[4] Aside from Markuze, the main modern-day pusher of the Nostradamian "Mabus" is the inimitably nutty John Hogue.

According to PZ Myers, Markuze began harassing him in 1993, starting with what Myers describes as "deranged messages" on Usenet and progressing to death threats over the years.[2] PZ Myers claims to have notified the Montreal police of Markuze's death threats several times to no effect. Markuze has also been active for over a decade spamming hundreds of atheist related websites, Twitter pages, online forums, and email inboxes, including making hundreds of death threats to other atheists with online presences. His rants also regularly show up in Usenet archives dating back as early as 1993,[4] making him one of the first (if not the first) Internet trolls ever.

Markuze's modus operandi tends to involve persistently posting threatening, incoherent and strangely formatted anti-atheist rants (including links to random Depeche Mode videos)[6] to any blog that strikes his fancy, rapidly morphing IDs (whenever possible including "mab" in the name) when he gets banned. His rants are often incoherent word salad (for example, "Atheist fuckers killed Mickey Mouse!"). His favorite targets include Richard Dawkins, Amanda Marcotte, Jen McCreight, Myers and Randi; he actually physically stalked Myers once at a conference in Canada - suddenly appearing in the hallway, ranting and raging incoherently with a few of the attendees, only to then literally run away from the scene (all of this the exact moment after someone had falsely pulled the fire alarm).[7] He wasted no time going online to brag about what had happened.[8] This resulted in Myers reporting him to the police in September 2009.[9]

After an August 2011 online petition[4] attracted more than 5000 signatures,[10] each resulting in an e-mail to the Montreal police,[11] the police took action and announced they were finally investigating years of complaints[12] (after pleading with people to stop sending them emails[13]) and arrested Markuze on August 16.[14] Markuze was charged with 16 counts of criminal harassment on August 15 and August 17, 2011.[15] To the relief of many concerned for his well-being, the criminal court ordered him to undergo a 30-day psychological evaluation. After being diagnosed with bipolar disorder, compounded by alcohol and substance abuse, Markuze was sent to rehab while awaiting the next court date[16] but was later released.[17] After pleading guilty to issuing threats, in 2012 he received a suspended sentence of 18 months,[18] which required him to abstain from internet discussions and forums.

Less than two months later, Markuze violated those terms and began harassing people via Twitter,[19] under the name Operation Archangel (@OperationArche, @Operati51436400 and variants).[20] He was re-arrested in November 2012[21] and released after a court hearing on 19 November, after agreeing to a number of conditions.[22] As of February 2013, he has violated those conditions first covertly and later overtly, sending threatening emails signed Mabus.

As of January 24, 2014, Mabus was still at it, enlisting the help of an alleged "friend" to harass PZ Myers and others.[24] His "friend" posted similar rants on other atheism and freethought-related message boards, which, after others' responses, quickly devolved into rants very transparently written by Mabus himself, thereby casting further doubt, as if any were needed, on the idea that someone as clearly deranged as Mabus could have friends.[25]

By May 2014, Markuze was through with the pretence of "friends" and had resumed posting under the Mabus pseudonym, in violation of his court order once again.[26] Markuze still believed that he had committed no crime, citing Freedom of speech:

The charges laid on me are based on hearsay and conjecture. I am being charged for my controversial ideas, not for any offence... The condition to not debate on forums is a direct violation of my fundamental human rights. This condition must be removed. I’m a writer who engages in debate with the power of words, not force of arms.[27]

End of an era (one would hope)[edit]

In June 2015, Markuze was finally sentenced to three years of probation with mandatory psychiatric treatment.[28] It was hoped that this would be the end of Markuze's story, with him receiving the help he clearly needs, but alas, no such luck.

As soon as his probation ran out in June 2018, he resurfaced under the nick Prophetofrevenge.[29] He is also going under the username "atheistkiller." Apart from the nick, nothing much had changed.

As of February 25, 2019, Markuze is still posting on internet forums, including those he's been permanently banned from using, this time using the nick skepticwarlord.[30]