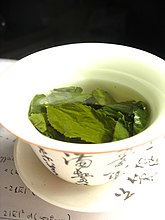 Steeping refers to the making of an infusion or tincture, by allowing solid matter to remain in contact with a solvent for a prolonged period. It has traditionally been a useful means of extracting herbal medicines and aromatic materials, or occasionally can mean the reverse – impregnation, as with dyeing. Chefs are familiar with it alongside related flavour development techniques such as marinating, basting and so on. It is an old-fashioned process which the public encounters daily whenever tea is brewed.

More recently the word has been appropriated, or rather misappropriated, by the vaping community to mean simply the maturation of a diluted flavour solution prior to vaping it. The analogy is with wines and spirits, which may mature slowly over months and years before final deterioration sets in, but some vapers hold that beneficial changes can occur in a week or two and such beliefs have become increasingly fashionable.

All in all, there is little evidence to support the current vogue for "steeping", a term hijacked from its proper meaning and used to promulgate an unproven mythology. That is a shame in an area which is establishing its credentials as a rational alternative to smoking. It will be interesting to see whether it proves a passing fad or whether some logical basis may eventually emerge.

E-liquids produced by genuine steeping are uncommon but include naturally extracted tobacco, where the leaves are macerated in the vaping solvent (propylene glycol and/or glycerine) directly. This has the aim of delivering some of the natural quality of tobacco but without combustion. There are other, more efficient and selective means of extracting tobacco (with supercritical CO2 for example), but they require specialist equipment and are expensive.

Certain chemical constituents of flavours such as aldehydes, ketones, organic acids and lactones can react with propylene glycol to produce a change in the aroma. On the other hand, flavour concentrates will normally have been left to 'rest' after being prepared by reputable firms, and are usually supplied in a propylene glycol carrier so any such reactions will have largely taken place already. (Of course there are more than a few unregulated products on the market, which might contain virtually anything, but that is another story).

Whether further heating on a water bath, or intermittent shaking/aeration will have positive benefits seems highly unlikely, though these practices have their adherents. Other suggested treatments range from the imaginative to the weird and wonderful. The preparation of e-liquids, a subject of great interest to the serious vaper, has fallen prey to the perils of pseudoscience.

Turning to fine fragrances, close cousins to flavours, can we learn anything from the situation there? Certain ingredients such as patchouli (Pogostemon cablin) or buchu (Agathosma spp.) leaf oil may improve upon ageing, but this is the exception rather than the rule. In general, alcoholic perfumes need time to settle down after the juice is initially mixed, but they start to slowly deteriorate in bottle after about six months, and more quickly if exposed to heat, light and air. "Steeping" is not recommended.