From RationalWiki
(Redirected from Tea)
Jump to navigation Jump to search 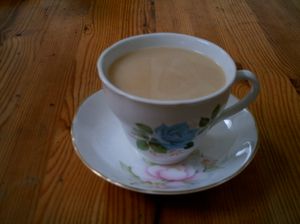 Tea is, of course, the lifeblood of the gods, and soul of the British nation despite their Irish neighbors drinking more per capita, Paraguay drinking the most in the world, and tea having a much richer history and culture in Asia with origins in China as well as the Russian nation. Japan is also known to like tea.

The Americans hated tea so much that they dumped it into an ocean bay river harbour harbor just to get rid of it. The king was so incensed at their lack of good taste that he sent an army to remind the colonists all about tea drinking. The rebellious colonials won kicked ass (with a lot of help from the French) and to this day rely on coffee as their primary source of caffeine.[citation NOT needed]

How to make a nice cup of tea[edit]

The Royal Society of Chemistry recently came up with a definitive recipe for the perfect cup of tea. Loose leaf Assam tea should be used (teabags don't allow the flavour to circulate properly). Soft water should be drawn into the kettle and boiled. Never re-boil old water as this drives out too much dissolved oxygen, essential for some of the chemical processes involved. While waiting for this, microwave a teapot, containing a quarter of a cup of water, on full power for a minute.

If you're feeling very rigorous, there's actually an ISO Standard for brewing tea

, pioneered by the British. We swear we are not making this up: the British Standards Institution was awarded the 1999 Ig Nobel Prize

in Literature for it.[3] Not to be outdone, in 2003 the Royal Society of Chemistry published their own news release titled "How to make a Perfect Cup of Tea."[4]

Canadian tea for one (or you and your buddies)[edit]

American tea for a par-tea[edit]

Since the unveiling of the Welfare State in post-WWII Britain, the traditional British method of making tea was seen as far too elitist for this new, more socialist era. The answer was Builder's tea which, with its more egalitarian flair, soon usurped the old tradition of British tea. It is made thusly:

Step 5 may be replaced with "leave for ten minutes or until the spoon dissolves."

It is good manners to offer a mugful to unwary visitors.[12]

Herbal tea (or Urbal tea if you're American) is somewhat of an oxymoron. The more accurate term would be "herbal infusion", but nobody calls it that.

Tea is made out of tea hence the name. Foul tasting concoctions of twigs, roots and goat droppings are properly known as infusions or "Jesus H Christ! What the fuck's this shite?". Although Good Earth does make a fantastic herbal tea infusion — just don't follow the instructions on the packet. Rather than removing it before 3 minutes to avoid making it "bitter", let it sit until it gets cold. That'll give you a mug of absolute eye-popping cinnamon & allspice goodness.

Communists like herbal tea because proper tea is theft.

over there and everything.

This raises the all-important question: Who is more serious about tea, the British or the Japanese?

The Big Three of Tea[edit]

According to some survey I can't be bothered to find, the British actually come in third in terms of 'most tea drunk per head' globally, behind Turkey and Ireland. Which just goes to show that this country is going to the dogs, why oh why oh why, must write a letter to the editor, faww faww fafaaw faw.

You may choose to watch the movie instead.