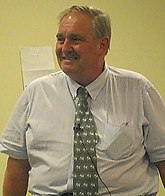 David Nutt (1951–) is a professor of neuroscience who specialises in studying the impact of drugs on the human brain. He's won a number of scientific merits for his contribution to various journals and research papers. For several years, he worked as a government drug adviser in the UK but was sacked for telling the truth (more on that later). The key emphasis should be on the word scientific. Nutt founded an independent scientific body called Drug Science which aims to provide evidence-based information about drugs, without political or economic influence. The organisation was formed in response to Nutt's sacking from his government role, which was motivated by the political and financial implications of his research.

Perhaps Nutt's most well-known work is his study into the relative harms of different drugs, measuring both individual and societal harm.[1] His research was conducted using a method known as multi-criteria analysis[2] which studied the outcomes and impacts upon people and society in relation to various drugs. Good ol' alcohol came out on top for harm to society, even outdoing scary drugs like heroin! It turns out that alcohol causes a whole host of problems like domestic violence,[3] car accidents,[4] and transforming regular people into absolute nutters. However, heroin and crack cocaine were considered most dangerous to the individual, which wasn't particularly surprising. The prevalence of opioid overdoses in the western world can be attributed to the immediate dangers of heroin and its other forms.[5]

The conclusion of Nutt's study was heavily publicised by the British media, provoking several live discussions and arguments with the professor. Many were incredulous that alcohol could be so harmful given its legal status; a number of journalists claimed that we should focus on eliminating the use of illegal drugs instead, and that alcohol isn't the main problem. In the wake of his findings, Nutt told BBC Newsnight that any drugs which are less dangerous than alcohol should be decriminalised, including ecstasy and cannabis.[6] Despite the death toll from alcohol being significantly higher than ecstasy, the media continually ignore the data and claim that so-called "party drugs" are the real problem. In the UK in 2018, 92 people died after taking MDMA (ecstasy) compared to 7551 alcohol-specific deaths in the same year.[7][8] Dismissing reality and aligning with a political agenda is so unbelievably common that the British media could almost be discredited for their biased tendencies. Ironically, many of the people who supposedly die from taking ecstasy actually die from overhydration in their attempt to compensate for potential water loss.[9]

As expected, the government wasn't exactly happy with his conclusion.[10] The vast amount of tax from alcohol is clearly a key factor in Nutt's dismissal; anything which could potentially reduce the popularity of drinking is an economic risk for the state. Criticising a blatantly harmful substance[11] and demonstrating its problems should be met with legislative change, not censorious denial. Unfortunately, Nutt was sacked for supposedly "campaigning against government policy" which was apparently incompatible with being a government adviser.[12] Isn't the process of critical evaluation just part of making changes to policy?

have a history of indulging in excessive alcohol consumption. Members of the notorious Bullingdon Club

are infamous for "trashing" different places whilst incredibly drunk. Their intoxicated debauchery even extends to hiring prostitutes and intimidating the general public.[13] This sentimental value of alcohol is another reason why many people were scathing of Nutt's research. They love to demonise the "real drugs" like ecstasy and heroin, all so that alcohol can be protected by its legal status and societal acceptance.

David Nutt has argued that the British government "artificially" separates alcohol and tobacco from other substances, claiming that drugs should be ranked on a "harm index".[14] He advocates for an evidence-based approach to the legality of different substances and believes that scientific research should be the foundation of drug policy, as opposed to the political factors which currently have a strong influence upon legislation.

at the time, claimed that Nutt was fired because he shouldn't be able to advise government policy whilst also being opposed to it. This essentially protects any policy from criticism because it prevents anyone from looking at potential flaws with new legislation. If that doesn't sound like an Orwellian approach to rule then what is? Johnson's comments are tantamount to saying, "If you don't agree with the government then you can leave."

Thankfully, Johnson was heavily condemned for his actions, with several senior researchers publicly demonstrating their disapproval of his decision. Dr Les King said that Johnson had denied Nutt his "freedom of expression".[12] Ironically, Nutt's "expression" was simply scientific findings and not even his subjective opinion. To punish those who present scientific data is the epitome of censorship.

David Nutt has been creating an alcohol substitute known as "alcosynth" or "alcarelle" which mimics the effects of alcohol, without the hangovers, health impact and the risk of excessive consumption.[15] Nutt's research into the societal and individual dangers of alcohol has encouraged him to develop a safer alternative which may be widely available in the future. The funding required to distribute and incorporate alcarelle into the marketplace doesn't yet exist; more importantly, the molecule hasn't undergone sufficient testing to be considered safe for people to consume. It's safe to say that many of the alcohol-related harms detailed within Nutt's research would be significantly reduced with the introduction of alcarelle.