Seconded Tyrannis (talk) 21:31, 11 February 2010 (UTC)
I have provided scientific evidence that the method in the article is the correct way. On rationalwiki, the scientific method takes precedence. All your base are belong to us! Mwahahahahaaa! Totnesmartin 11:34, 23 July 2007 (CDT)

I think that Yukes probably make the worst tea in the tea drinking world. The recipe in the article is excellent but not common practice. Hurling a teabag into a mug and dropping lukewarm water on it followed by 4 or 5 spoons of sugar and a slurp of milk - that's the normal way to make a cuppa. (I've spent 40+ years in British industry and believe me I know. Everywhere else tea is treated as something special and care is taken. I've even had a good cuppa in France (turns round three times spits and says 'Whurra' to break the bad luck). Keepthe faith 11:42, 23 July 2007 (CDT)

BUT a single malt (Ardbeg for choice) makes you forget your beverage troublesKeepthe faith 13:18, 23 July 2007 (CDT)

Ps think 'Tea' should probably be in ACD Keepthe faith

But what the hell is ACD?

Hmm. I just realised that my edits contradict the Royal Society. I'm going to have to insist they ring up my mum so she can explain it to them. SuspectedReplicant 20:03, 8 September 2009 (UTC)

Seeing as i actually laughed while reading this, I thought I'd nominate it for Best Of Amusement. Cast your votes!

I sure hope this article was written by a parodist, because adding milk to your tea is just as barbaric as pooping in pea soup. --GTac 10:03, 21 September 2009 (UTC)

You people put the tea in terrible! God obviously intended that only a slice of lemon would be allowed in a gentleman's cup of tea. If this were a tea-ocracy, you'd already be nailed to a giant T by now.. --GTac 12:35, 21 September 2009 (UTC)

So much depends on what beverage you're drinking. When I was drinking tea in manholes whilst working as a telephone cable layer then it would have been nigh on impossible to drink that beverage without milk. Hey, it nigh on dissolved the teaspoons. On the other hand my grandmother's lapsang souchong should only be drunk with a slice of lemon and from the finest porcelain. The word Tea covers a multitude of differing beverages - and don't even start on herbal teas... Bob Soles 12:43, 21 September 2009 (UTC)

It's only real tea when it's had three cheap tea-bags stewed in it for an hour (and warmed back up in the microwave) then a massive dash of milk and three/four sugars. Me calls it Wake Up Juice.

Despite the perhaps radicalism of my younger days, I find that I must now agree with Phantom Hoover. It truly depends on the tea. (Although, the only truly enlightened method is to drink it straight, with no additives) Pinto's5150 Talk 13:01, 21 September 2009 (UTC)

I got this story about third hand so it might not be 100% but it's worth telling as an illustration of how knowledge of proper tea making is declining.

Two social workers dropped into the house of an elderly lady who lived on her own. They were there to check that she was capable of living alone or whether she should be taken into care. The lady offered them a cup of tea and they accepted. She followed the official RW instructions on tea making and served them their tea. After they talked to her for a while, the two left.

Their recommendation was that she could no longer live alone. She was so absent-minded that both workers stated that they saw her tip water into the teapot and then tip it out again before finally making the tea.

Fortunately, their manager recognised that she was simply warming the pot and told them to go away and learn how to make a proper cup of tea.

So while this article might be funny, it's also deadly serious! –SuspectedReplicantretire me 12:09, 23 September 2009 (UTC)

What the spoot? Who DOES that? I can understand sugar, honey, cinnamon, cocoa extract, nutmeg, and so on (I don't like any of those however), but MILK?! I thought it was a joke, but apparently people do this. Why? In my opinion, while green and white tea is pretty good and can be enjoyed on their own merits, the ideal black tea is bitter. Black tea with bermagot oil with two bags per three cups is my favorite, though I enjoy more sour blends. Black tea should kick you in the face, force its way down your throat, and cause your tongue to fall off. So while I'll begrudgingly accept sweeteners or spices in it, if it's black it better be so bitter it makes your tongue shrivel up from the tannins! George Orwell, how could you do that to us? --Dr. Swordopolis (talk) 04:11, 29 October 2011 (UTC)

At least this article is funny and improving.

Should we move more mainspace fun into funspace instead of deleting it? Proxima Centauri (talk) 12:15, 21 September 2012 (UTC)

We should drink tea. This is all the action that is required. ± 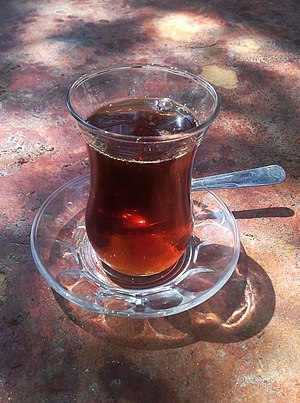 With plenty of sugar

I'm a let you finish but Glorious Turkey is the number one consumer of tea OF ALL TIME!!!! of all time!

Honestly though, since the days of the best dictator in the history of the earth, Turkey is the number one consumer of tea. I find it rather shocking to not see this mentioned or even alluded to in the article. Harrumph. Avengerofthe BoN (talk) 16:01, 24 August 2015 (UTC)

...properly served as a saturated sucrose solution, with crystals in the bottom of the glass to prove it. MaillardFillmore (talk) 16:49, 24 August 2015 (UTC)

Can be useful, if you e.g. studying for an exam (my father told me, how he had a friend of his ask his girlfriend to pilfer some intravenous caffeine for their day before the college exams).--Arisboch ☞✍☜☞✉☜ 17:05, 24 August 2015 (UTC)

As a matter of fact the Turkish tea culture partially derives from the Turkish coffee culture. Atatürk decided that as Turkey had just lost the Ottoman territories/colonies/whathaveyou importing large amounts of coffee would be unwise, so he said all Turks should drink tea. And as Atatürk was Atatürk, all Turks drank tea, changed their headgear, started writing in Latin letters and got surnames like "Özdemir" Avengerofthe BoN (talk) 00:13, 25 August 2015 (UTC)

When you become aware RB is 'sitting in the computer'