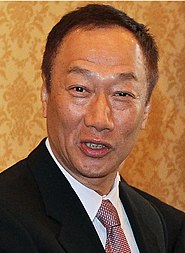 Guo Taiming or Terry Gou (1950–) is a right-wing populist, a radical Chinese nationalist in Taiwan. He is called the "Donald Trump of Taiwan" because of his right-wing political leanings and because he is very rich. He joined the KMT in 2019 and held a primary within the KMT to run in the "2020 Taiwanese presidential election" before resigning. He left the KMT the same year.[1] He strongly opposes the Taiwan independence that is pursued by the radical left-wing camp in Taiwan, and he has an ultra-conservative and pro-China political inclination. But Gou describes himself as a "pro-China conservative and pacifist".[2]

He is also famous as the founder of Foxconn, which is notorious internationally for it’s terrible and ardent labor rights.[3]

He is anti-American due to his strong nationalist tendencies, and he often makes racist comments about Koreans. He often calls Koreans an ethnic slur, Gaoli bangzi(高麗棒子)

, and said that "Unlike Koreans, the Japanese don't hit the back of their heads."[4]