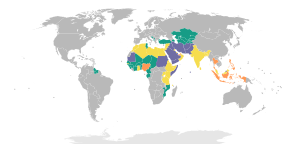 Use of sharia by country

Sharia (Arabic شريعة, lit. "the way") is Islamic law covering conduct in all aspects of life, though nowadays it is primarily applied in commercial and personal relationships. There are multiple schools of sharia jurisprudence, each, of course, claiming to be the correct understanding. Sharia is not codified, and is best thought instead as a way to enforce laws based on the teachings of the Qur'an and hadiths. Sharia is commonly and incorrectly labeled "sharia law" when it should simply be written as sharia. It is roughly analogous to halakha in Judaism.

Many Muslims consider it a good idea for moral guidance. But in some countries under sharia, Mutaween (religious police) enforce the practice of the law.

When assessing sharia, however, it is important to remember that it is not a single thing. Every country that implements some form of "sharia" does so differently, in terms of the strictness of the laws, the specifics of the laws, and whether or not the laws apply to non-Muslims.

Unlike secular laws, sharia is based on religious teachings, and is seen by traditionalists as a reflection of God’s will. The precepts of sharia reach beyond criminal law and provide conventions for many other aspects of life, such as diet, clothing, and regulated prayer. Women are expected to be obedient, husbands may beat their wives even for suspected but unproved arrogance,[1] but those who disagree with this can argue that "the best example was the Messenger himself [Mohammed] never beating a woman".[2] On top of that, there's a strong case to be made that "sharia" can and should be considered primarily a guide to personal morality, with its prescriptions for social laws being subject to override by civil authorities if it's in the public interest — and there's also a decent case that it's not.[3][dead link] In other words, the sharia is a mess — nobody's really sure what it's supposed to be (some people say they're sure, but we call these people extremists when we're being polite) or how it's supposed to be applied. It makes the Jewish arguments over the Talmud and Halakha look small by comparison.

There are at least five main interpretations of sharia. They are largely based on common precepts, but are by no means identical:

Other Muslim scholars interpret the Qu'ran in much more moderate ways than the extremists.[4]

The Hanbali school is the forerunner of the modern Wahhabi-Salafist school dominant in the Islamic State. It views the Qur'an and Hadith as true and correct and not open to interpretation. Logic and reasoning are believed to open the way to human desire, distortion, and deviancy. Human desire will compromise human interests with religious truth.

Quentin Wotorowitz describes how Salafis arrive at legal judgments that affect all aspects of contemporary society, culture, and governance:[5]

Salafis like to approach the process of applying religious principles to contemporary issues and problems as though it is a scientific enterprise governed by the hard laws of nature (in this case divinity). The Salafi creed outlines the rules for generating religious opinions to ensure that conclusions are methodologically sound and based on solid evidence from the Qur’an, Sunna, and consensus of the companions. This creed, Salafis assume, eliminates (or at least limits) the potential of human bias and error by structuring the process of deduction and the criteria for acceptable findings according to the Prophetic model. In a way, it is a positivistic approach that eschews normative ambiguity, relativism, and the possibility of multiple truths. If one follows the method and procedures of the Salafi creed, the expectation is that religious rulings represent the unadulterated and singular truth of God’s will because they rely on the original and pure sources of Islam.

In this endeavor, Salafis frequently exhibit the arrogance of scientific certitude. Because there is only one straight path and saved sect, the Salafi creed and method are seen as inexorably producing the "correct" Islamic understanding. Conclusions are represented as the teleology of a process rooted solely in the sources of Islam. It is as though Muslims posit questions to a computer run by divine software. Ipso facto, all alternative conclusions are misguidance and reflect the interjection of human reasoning or a lack of religious training and knowledge, the glitches of inferior programming. In these circumstances, well-trained scholars are truly doing God’s work: they merely take contemporary questions and follow methodological rules set out by God.

In 1990, Muslim majority nations criticized the United Nations' Universal Declaration of Human Rights for being a secularized version of Judeo-Christian principles. They released a "sharia-compatible" version of the declaration called the Cairo Declaration on Human Rights.[6] It's rather ambiguous on a number of rights. Article 1 states:

The International Humanist and Ethical Union criticized the Declaration for limiting freedom of religion and speech.[7] Blasphemy, for example, is still punishable by death in some areas in the Middle East. Similarly, apostasy is punishable by death in some countries, including Iran and Saudi Arabia. The most infamous incident relating to this is probably Ayatollah Khomeini's call for the execution of Salman Rushdie.[8]

Haziq-Ul-Khairi, Chief Justice of the Federal Shariat Court of Pakistan

The implementation of sharia varies across the globe. Saudi Arabia bases its legal system heavily on its interpretations of sharia and has given sharia courts complete authority over jurisprudence. However, this is an uncommon feature, and many Muslim states use dual systems of secular and religious courts or only implement the sections of sharia that address financial and marital issues. Iran's government adheres to the Shi'a school of Islam and views sharia as a Sunni phenomenon. In practice, their laws are generally similar, but in some areas, human rights are actually better in Iran when compared to Saudi Arabia. For example, only a certain brand of Islam is allowed in Saudi Arabia, whereas women in Iran must wear a headscarf (that is, the face may be uncovered) and most religious minorities are semi-protected.

Corporal and capital punishments are common under the stricter interpretations of sharia, and much of the judgments are incomprehensible to Westerners. In November 2007, a multiple rape victim in Saudi Arabia was sentenced to 200 lashes for initially being alone with a man who was not a relative. The victim's lawyer was suspended from the case as a result of the appeal, and his license was revoked.[9]

Saudi interpretation of sharia has been strongly influenced by the dominant Wahhabist movement and some claim that such cases cannot be seen as representative of Islam as such. Hence the significant outcry from "mainstream" Muslims about it, almost as loud as Christian denunciations of fundamentalists...oh, wait.

On 1 May 2014, Brunei became the first Southeast Asian state to introduce strict sharia, which applies to both Muslims and non-Muslims.

An anti-sharia billboard in the US, 2008

"Creeping sharia" is a fairly recent wingnut conspiracy theory peddled by the likes of Pamela Geller that asserts Muslims are implementing sharia in American court systems. Alternatively, it's a reaction to what has happened in other nations. This fear has been stoked by comments from politicians such as Sharron Angle and Newt Gingrich and manifested in the Park51 and Halal soup incidents, as well as legislation passed in Oklahoma banning the use of sharia in state courts[11][12][13] and efforts to prevent the opening of a mosque in Murfreesboro, Tennessee.[14] Frank Gaffney has also touted "research" that supposedly proves that the Muslims are taking over the judicial system.[15] Ironically, many people raising the alarm about sharia share the homophobic, misogynist, religiously intolerant attitudes of extremist groups which do not agree with actual modern sharia practiced by nonviolent Muslims. References to the Qur'an in US judicial rulings are in fact rare, whereas references to the Bible are widespread.[16]

A protest against sharia in the United Kingdom, 2014

In Britain, Sharia courts have no legal standing any more than Jewish beth din or your mate with a gavel. Still, Muslims may accept their verdicts either for religious reasons or through community or family pressure or intimidation, including violence.[17][18] Sharia is implemented in the UK by Muslim Arbitration Tribunals, which were introduced in 2007, and sharia councils, which have existed since 1982.[19] These courts deal exclusively in civil law, and only in cases where both parties consent to the use of sharia. In areas of law such as divorce settlements, a civil court must still sign off on the verdict after a sharia court has ruled.[20]

While these courts have no legal standing, Muslims can be pressured to accept the verdicts, particularly in divorce cases, where Islamic marriages are not properly registered and hence not recognized by civil authorities.[18] Those who do not consent to the use of sharia can be illegally coerced into cooperating by threat, intimidation, or the ostracization of being a "kafir".[21] Similar concerns have also been raised about other religious courts, such as Jewish beth din.[22]

In 2014, the Law Society issued a practice note instructing lawyers on how to prepare Sharia-compliant wills.[23] This note was strongly opposed by the Lawyers' Secular Society[24] and was later withdrawn.[25] In January 2013, there were incidents described in the media as "Muslim Patrols" where some vigilantes claimed to be imposing sharia, including on non-Muslims, by confronting gays, women in miniskirts and alcohol drinkers.[26] These incidents were not recognized by the UK government as anything other than the acts of criminal gangs. Nonetheless, Islamophobes frequently cite these as being somehow connected to the legal arbitration courts.[27]

In recent years, sharia councils have been used increasingly in the UK, and there are claims some of them act unfairly toward women, legitimizing forced marriages and issuing discriminatory divorces to women. There are claims that some women were victims of inequitable decisions. In 2016, then-Home Secretary Theresa May launched an official inquiry into the relationship of sharia law to the secular justice system, led by Mona Siddiqui. At the time, May claimed there was only one rule of law in the UK, stating that there would be a review of whether sharia discriminates against women, and also "whether, and to what extent, the application of Sharia law may be incompatible with the law in England and Wales".[28] There were serious concerns about the inclusion of theologians and fundamentalists in the review, as well as doubts over its impartiality.[29]

The inquiry reported in 2018; it recommended that all marriages in the UK should require civil registration, so they could not be conducted by religious leaders without official records or the legal protection that comes from a legally-recorded marriage. It also suggested an awareness campaign to tell Muslims that their Islamic marriages may not be officially recognized and better regulation of sharia councils.[31][17] While they praised the recommendations as a small step in the right direction, the report was overall criticized by the National Secular Society for failing to fully protect women's rights and entangling religion and the secular authorities.[31] A requirement for civil registration is necessary because according to a 2017 report, the majority of UK Muslim marriages do not include a civil marriage recognized in UK law, leaving women unable to get what should be their legal right if the marriage breaks down.[32]

Aside from these legitimate concerns, opposition to sharia law has also become a talisman of the far-right in the UK, despite the already-mentioned fact that sharia law has no legal status in the country. UKIP have called for sharia law to be entirely banned.[33] The English Defence League rant incoherently about "the political ideology of Islam, which [...] seeks to subjugate us all under the barbaric rules of Sharia Law".[34]

In 2005, a Canadian committee headed by former Attorney General Marion Boyd recommended allowing Muslims in the province of Ontario to establish sharia-based civil law tribunals (similar to religiously-based tribunals already in use by the province's Catholics and Jews). After a strong public outcry, Liberal Premier Dalton McGuinty vetoed the plan and moved to prohibit religious tribunals of any kind.[35]