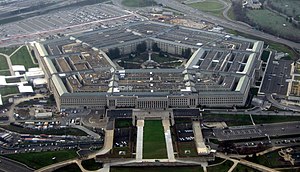 The United States Ministry of Peace Department of War Defense maintains its Military-industrial complex bureaucratic headquarters in a five-sided building, which, imaginatively, is known as The Pentagon. Apparently the shape was chosen because it reduces the time for someone to walk from one office to any other[1] (it doesn't take more than seven minutes to walk between any two points). Planned and built in the early 1940s,[2] the building has over 3.7 million square feet of floor space; about 24,000 people work there daily.[3]

The Pentagon was one of the three buildings attacked on 9/11 by terrorists armed with box cutters and jet planes.

The Pentagon has twice as many bathrooms as it needs (and thus twice as much toilet paper). This is due to its having been built in (then-)segregated Virginia. However, at the same time, President Franklin Delano Roosevelt had passed an executive order banning segregation within federal government facilities. Thus, even though they were built, the bathrooms were never designated by race as were facilities in the rest of Virginia.[4]