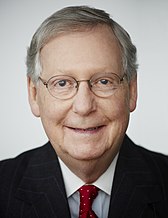 "Moscow" Addison Mitchell "Yertle The Turtle" "Master of Disguise" McConnell, Jr. is senior U.S. Senator from KY a greasy lobbyist for Wells Fargo,[3] Big Coal,[4] Big Guns[5] and Big Tobacco,[2] now working for Big Insurance.[6][7] He is the current minority leader for the Republicans in the Senate, and the longest-serving Senator from Kentucky ever. He is also a massive tool who will do anything and violate just about any principle for the sake of his party.[8] What distinguishes him from his GOP colleagues, almost all of whom are similarly unprincipled, is that he is very good at it.

Despite his modern reputation as a Conservative obstructionist, when McConnell began his political career in the late 1970s, he was part of the Republican party's Liberal wing; he supported the Civil Rights movement, worked to block restrictions on abortion, backed collective bargaining rights for public employees, considered himself an environmentalist, and even used "Progressive" as a compliment. Kentucky was still a Democratic stronghold at the time, so this worked to his advantage.

However, he entered the national sphere at the exact time the Republicans were making a rightward shift away from figures like Gerald Ford and Nelson Rockefeller, and in what became a pattern across his career, McConnell abandoned his previously held principles in the pursuit of power and power alone.

The Republican party owes all of their victories to McConnell. He was the architect of their 2010 sweep, and the man who single-highhandedly forced the Republicans to stuff anything and everything "Obama" at the start of his term. If it wasn't for McConnell, you wouldn't have had the Tea Party. He blocked Obama from appointing Merrick Garland to the Supreme Court on the most absurd of pretexts, and instead allowed Trump to nominate Neil Gorsuch, whom McConnell's Senate approved.

His wife, Elaine Chao, was tapped as Transportation Secretary by Trump. As Labor Secretary under Bush II, she was responsible for rolling back key safety protections that cost miners their lives,[9] and she has paid fines for illegal campaign contributions in the past.[10] She was part-and-parcel of the cronyism that defined Trump's cabinet.

Even though he has risen to a very high office, he appears to have little personal ambition. When Trent Lott resigned his post as Senate Majority Leader, and McConnell was Majority Whip, he did not lobby to be made the next Majority leader, but instead let Bill Frist take it.

To date, McConnell has not been caught in any scandals. During his tenure as the chairman of the Ethics Committee, it recommended that Republican Bob Packwood be expelled knowing full well that Packwood's replacement would almost certainly be a Democrat. The most questionable thing he has done so far has been to campaign for the utterly corrupt Republican governor, Ernie Fletcher. However, none of Fletcher's scandals involved McConnell in any way. However, even in Kentucky the Republican brand was thoroughly damaged, and he had a tough fight for reelection in 2008.

The reason Republicans not only tolerate one of the most hated politicians in the nation, but make him their de facto leader, is that his strategies work. Even as the minority leader(during the early Obama administration), he is so skilled at constitutional hardball that sabotaging a Democratic president with control of congress seems almost trivial. As majority leader, he can turn a president elected with a massive mandate into a failure, and remake the judiciary in his image. This in turn makes Democratic voters dangerously apathetic and depressed turnout carries his party over the edge. We saw this in action in 2010, 2014, and to a lesser extent 2016. McConnell is arguably the most influential senate party leader since Lyndon Johnson. 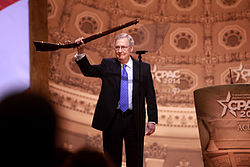 His biggest achievement to date was tricking Obama into signing the ACA. Obama then takes all the blame for passing a Republican healthcare plan which will then act as a permanent poison pill for single payer in the future. McConnell has also vehemently stated many times that the Republicans' goal was to "deny Obama a second term." Not only has he failed in that regard, after becoming Majority Leader in 2014, he followed that up by… helping the Obama administration push through the Trans-Pacific Partnership, which Trump later pulled out of solely because… Obama.

The only two issues that McConnell seems to be passionate about are flag desecration and campaign-finance reform. Contrary to his party, he believes strongly in the right to desecrate the flag, seeing it as protected under the First Amendment.[12] He is also fiercely against campaign finance regulation, feeling that it violates the First Amendment (but also his sources of funding). Indeed, he was against campaign finance reform even when both parties wanted it. The tactics he used against these bills in the early 90s would give him the experience in procedural abuse that would serve him so well during the Obama administration.

He is considered ever-so-slightly better on gay rights than the rest of the GOP. This means, of course, that he is OK with the fact that gays exist and might, conceivably, hire one. Moreover, he is less willing to use gay rights as a wedge issue in a campaign, unlike the erstwhile junior senator, Jim Bunning

. That he is not as anti-gay as the rest of the party has helped fuel extensive speculation that he is, in fact, gay. (Last election saw fliers photo-shopped to make McConnell into a member of the Village People. That the Democrats of Kentucky would resort to gay-bashing tells you everything you need about KY politics. Shit sandwich of a different color.)

The nickname "Moscow Mitch" was first used in 2019 after the House had passed two bills aimed at securing the United States election from interference. McConnell unfortunately revealed himself to be yet another Russian asset in the White House when he blocked both bills from being voted. The good senator's infamous connections with Russian influence peddlers did not begin there. During the presidential campaign of 2016, McConnell refused to make a bipartisan statement warning the public of Russian attempts at election interference.[13] Russian Tycoon, Oleg Deripaska was sanctioned in April 2018 for attempting to meddle in the U.S. elections. McConnell was among the advocates for lifting sanctions on Rusal, a Deripaska controlled company. Shortly after sanctions were lifted, Deripaska’s company announced a $200,000,000.00 investment in Kentucky, Mitch's home state. Furthermore, Len Blavatnik,

a Soviet Union-born dual national of the US and UK, is financially associated with Russian oligarchs, and he donated $3.5 million to political action committees associated with McConnell.[14] A Pentagon white paper report, Russian Strategic Intentions, concludes:

Hybrid tactics are most effective when the target state has lost the will or capacity to resist. Conversely, countries that do not have these vulnerabilities face little threat from Russian adventurism short of full-scale war. The most prevalent indicators or “signposts” that an entity is vulnerable to Russian hybrid actions include political and social turmoil, large Russian investments in its key capabilities, and weak security structures.[15]

With his wife embroiled in a corruption scandal, McConnell can see the writing on the wall. As a man pushing 80, who has served in the Senate since 1985, is pushing for the Kentucky legislature to change the law so the governor has to appoint someone from the same party as the retiring incumbent. Currently, Kentucky's governor, a Democrat named Andy Beshear, can appoint a temporary successor to fill an empty Senate seat until the next election. The new law "would strip the governor of that power and put it into the hands of the state GOP." Kentucky has a veto-proof Republican super-majority, which means Governor Beshear, who opposes the law, has no real ability to stop McConnell from rigging his own succession and installing one of his goons to replace him.[16] [17] McConnell has a list of his most favored potential successors, Kentucky Secretary of State Michael Adams (a former McConnell Center scholar), former United Nations Ambassador Kelly Craft (whose billionaire coal husband is a major McConnell donor), and Attorney General Daniel Cameron, described as McConnell's protege and the man who let Breonna Taylor's killers roam free.[18] [19]